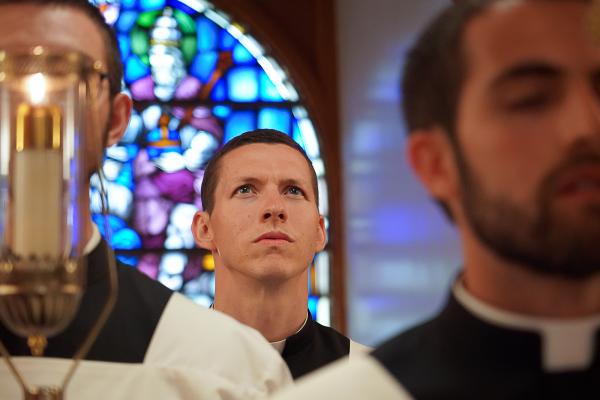 His family used to call him the monk — from an early age.

“Because he was never one for possessions,” his mom explained.

“He always had something rare about him,” his father said. “He was never attached to material things.”

He was attached to relationships and his faith. Now, Br. Tyler Roth Mentzer, MIC, is permanently attached to his religious vows as a Marian Father.

Making a gift of himself to the Lord, he professed his perpetual vows as a Marian on Aug. 16, in a liturgy celebrated at the National Shrine of The Divine Mercy in Stockbridge, Massachusetts.

You can watch the full celebration here:

“I just feel humbled and overjoyed,” said Br. Tyler, following his profession of vows. “I just feel the overwhelming sense of God’s love, the immense love that He pours out. And I will, in my own way, offer myself back to Him. I’m so grateful for the opportunity to say yes to Him.”

By the grace of God, Br. Tyler will be ordained to the diaconate in January and to the sacred priesthood next summer.

Brother Tyler’s faith, his good nature, his desire to serve, and his love for Christ and His Church are key character traits as the Marian Congregation grows in numbers and expands its outreach.

But let’s also be clear about another important skill Br. Tyler has brought to the Congregation: He’s a ripper out on the dusty diamond. A baseball player, that is. He played at Philadelphia University on a scholarship, and his talents have been a welcomed asset to the band of Marian brothers in Washington, D.C., who had grown accustomed to getting shellacked in the annual Labor Day weekend softball game against the mighty Dominicans. David versus Goliath sort of stuff here.

“In 20 years, the Marians have probably won two or three times, so it was almost a hopeless case,” noted Fr. Joe Roesch, MIC, the Marian Fathers’ vicar general, in his homily.

“If that miraculous victory has anything to do with hastening the Lord’s return, we can thank Br. Tyler for that,” Fr. Joe said.

But as to those other talents, Fr. Joe said, “Tonight, Br. Tyler wants to offer all of his gifts to the Lord, to be of service to the Lord for the rest of his life.”

By professing his perpetual, or “final” vows, he has pledged on his honor to perpetually live “in conformity to the life of Christ, who was poor, chaste, and obedient.” Brother Tyler defines the consecrated life as one set apart by God in order that, like the apostles, he may dedicate himself to Christ and draw closer to Him through prayer, love of neighbor, and apostolic works.

For him, the Marian motto, “Pro Christo et Ecclesia” (For Christ and the Church), isn’t merely obscure Latin words on a Congregation’s official crest, but rather serves as an invitation to take action — an action of surrender and assent to a code of life whereby he will strive to do all for Christ and His Church.

The readings he chose for the Holy Mass underscored this commitment.

From Isaiah 61:9-11 come the words: “I rejoice heartily in the Lord, in my God is the joy of my soul; for he has clothed me with a robe of salvation and wrapped me in a mantle of justice.”

From 1 John 4:7-16, we hear the call to “love one another, because love is of God; everyone who loves is begotten by God and knows God.”

From the Gospel of John, 12:24-26, Jesus instructs us how to adhere to the radical call of service: “Amen, amen, I say to you, unless a grain of wheat falls to the ground and dies, it remains just a grain of wheat; but if it dies, it produces much fruit.”

By professing perpetual vows, Br. Tyler has, indeed, died to self in order to live in Christ. After professing his vows, he was led to the altar where he signed his name to the official document containing his vows and oath of perseverance. When he placed the pen back down, he looked out to all assembled with a beaming smile whose only other worldly correlation could be that of a child on Christmas morning enmeshed in the miraculous.

Sitting just behind Br. Tyler as he professed his vows were his parents, Robin and Valerie Mentzer of Biglerville, Pennsylvania. They said their son Tyler, from an early age, had displayed a yearning to help those in need. Playing T-ball at the age of 6, Tyler went out of his way to help a teammate who was “struggling and was getting frustrated,” Robin said. “He made it a point to help this guy.”

“He has always had that sense to reach out and help other people,” said Valerie. “He always has had such a joy to serve.”

As for his personality, she said, “He was always very strong-willed his whole life, and we would always say, ‘Oh my gosh, dear Lord, please let it be strong-willed for the right things, for positive things. When he decides something, he’s all-focused, all-in, and that can be your worst or best trait.”

His strong will has, indeed, become a virtue. It revolves around sharing the faith with others and helping the Lord bring about the salvation of the world, one soul at a time.

His focus was sharpened during his first year of seminary when he read True Devotion to Mary, St. Louis de Montfort’s classic statement on the spiritual way to Jesus though Mary.

“When he was introduced to that,” Valerie said, “the floodgates just opened up. He directed himself to a life of humility and service to others. His whole life radically changed.”

Brother Tyler’s call to the priesthood began in his late teens as “a gentle echo, an invitation from the Lord saying, ‘What if?’” he said.

During his final years at college, the call became much clearer. He entered his diocesan seminary, but once there, he received a “call within a call” to join the Marian Fathers. It was during his third year in seminary when, one evening while he was in his room, he felt in his heart the Lord calling him to go to the chapel. He sensed the Lord wanted to reveal something to him. There, Tyler prayed a familiar devotion, the Rosary, and then a newer devotion, the Chaplet of Divine Mercy, with the assistance of a how-to pamphlet. The closing prayer of the Chaplet made such a powerful impression on him that he flipped to the back page to see where it came from.

He said, “I saw Marian Press with the Marian logo. When I saw that logo, the Holy Spirit was saying to me, ‘This is what I want to show you, Tyler.'”

A deep sense of joy entered his heart, and he immediately went on his computer to learn as much as he could about the Marian Fathers.

Sunday evening, at the close of the Mass of perpetual vows, Br. Tyler followed the Marian tradition of placing a single rose at the feet of a statue of Our Lady. Then, before the closing procession, family and fellow Marians in attendence gave him a standing ovation. He had clearly rounded third and was heading home.