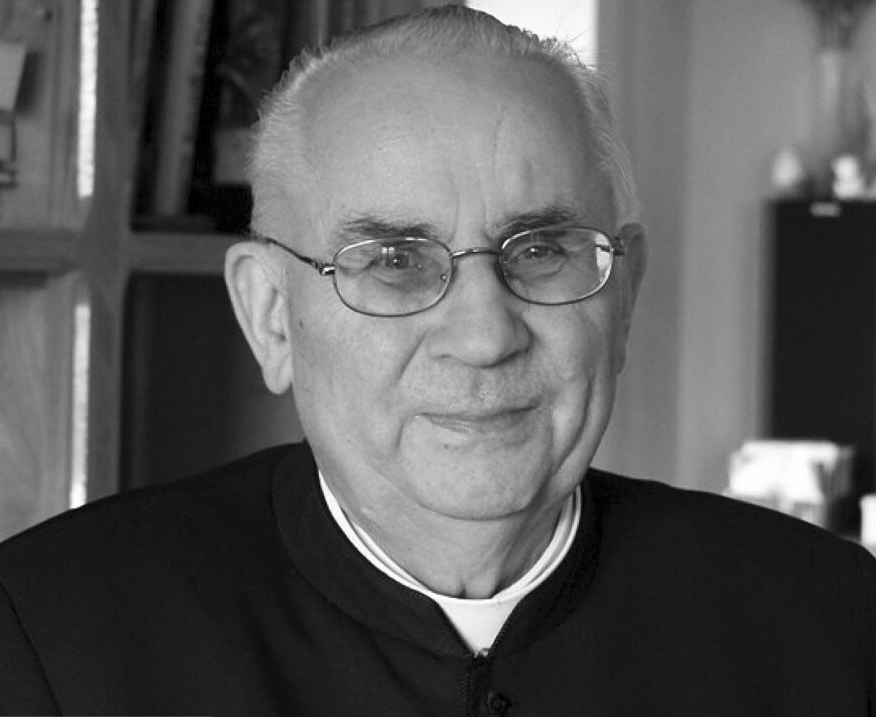 Licheń, Poland: On Nov. 12, 2020 Father Eugeniusz Makulski, MIC died in the early hours of the morning at the hospital in Konin. He was 92 years of age, a religious for 71 years and a priest for 65.

Eugeniusz Makulski, son of Bolesław and Julia née Jagucka, was born on February 9, 1928 in Kotarszyn, Waśniów parish in Opatów county, Poland.  When he was 4, his father died. He had three half-siblings: a brother and two sisters from his mother’s second marriage, to a man named named Chojnacka.  In the years between 1934-1937 he attended the school in Szeligi, and then was taken by his uncle, who was the head of a primary school in Miłków, to live with his family. In 1941, he obtained his certificate after completing six years of schooling.   Afterwards, he returned to Kotarszyn, where he worked on the family farm until the fall of 1943. Then, he worked for a year as a turning apprentice at a factory in Starachowice. In April 1945, he went to high school in Ostrowiec Świętokrzyski and completed there his first year of studies ahead of schedule. In September 1945, he and his uncle left for Grudziądz where Eugeniusz attended the 2nd year at the King Jan Sobieski High School, earning his high school certificate in 1948.

He was admitted to the novitiate in Skórzec in 1948 and made his first profession on August 15, 1949. He completed a two-year philosophy course at the Marian Institute of Philosophy and Theology in Bielany from 1949-1951. Then, for a year, he was an educator in our Minor Seminary, also in Bielany. From 1952-1954 he completed in Bielany his first two years of theology and on August 15, 1954, he made his perpetual vows in Skórzec. Due to the closing of our seminary by the Communist authorities of the People’s Republic of Poland, Eugeniusz studied the remaining two years of theology in Włocławek. He was ordained a priest in the cathedral basilica in Włocławek on June 26, 1955 by the Bishop of Włocławek, Antoni Pawłowski.

After completing his studies, he was assigned to pastoral work as a vicar and prefect in Głuchołazy. In 1957, after being released from his duties, he was appointed prefect of the student brothers and from 1959-60 served as a vicar in the parish of Krekole, near Stoczek Klasztorny. From 1960-1965, he studied history at the Faculty of Humanities of the Catholic University of Lublin, which he concluded by writing a thesis under the supervision of the renowned historian Fr. Mieczysław Żywczyński entitled “Devotion of Father Stanislaus Papczyński.” In 1962 he became a member of the provincial committee for preservation of the Church of Our Lord’s Cenacle and the tomb of Father Stanislaus Papczyński in Marianki/Góra Kalwaria. In 1964, he started a research project on the history of devotion to the miraculous image of Our Lady of Licheń.

In 1965, he was transferred from Lublin to Licheń to prepare for the ceremony of coronation of the miraculous image there. In December 1966, he became the vicar, and a year later the parish pastor and the rector of the Licheń shrine. On August 15, 1967, the ceremony of coronation of the miraculous image of Our Lady took place. In the years between 1966-1969, Fr. Eugeniusz served as the Lichen house superior, becoming for the next several terms deputy house superior. From the very beginning of his stay in Licheń, he systematically promoted devotion to Our Lady of Licheń and worked on the enlargement of the shrine. Fr. Makulski initiated the lay movement called Marian Spiritual Family based at the Licheń shrine and, thanks to his efforts, from 1994-2004 a new shrine – the largest in Poland – was built. In 1999 Pope St. John Paul II visited and blessed the shrine, then still under construction.  The church, consecrated in June 2004, received the title of minor basilica the following year. Released from his duties as rector and pastor, Fr. Makulski lived in Licheń until the end of his life. Funeral ceremonies took place at St. Dorothy Parish Church in Licheń Stary on Saturday, November 14, 2020.