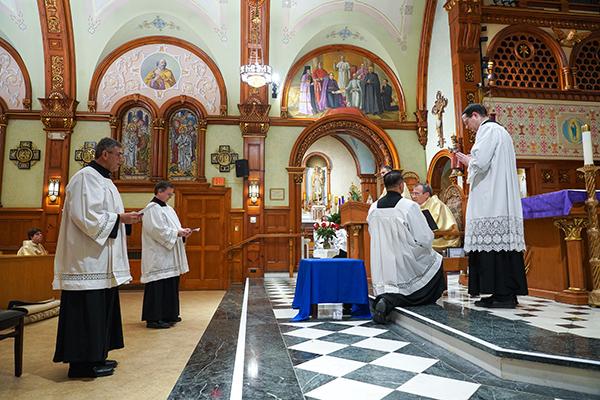 With great joy and profound thanksgiving to God, the Marian Fathers gathered in the National Shrine of The Divine Mercy on Dec. 12, for the Mass of Perpetual Vows of two men who get things done.

Brothers Mark Fanders and David Guza professed perpetual vows of chastity, poverty, and obedience, thereby becoming full members of the Marian Fathers of the Immaculate Conception, a Congregation called by God to spread the message of Divine Mercy, promote devotion to the mystery of the Immaculate Conception, pray for the Holy Souls in Purgatory, and go where the need is greatest.

“The two of you have dedicated yourselves completely to the service of God,” said the Very Rev. Kazimierz Chwalek, MIC, in his homily. “You want to serve, fully. You don’t waste time. You don’t even waste a moment. You want to take advantage of every moment that’s given to you. For what? For the promotion of the Gospel — sometimes with words, but mostly with works.”

Indeed, both men prefer to work — and they prefer to do so behind the scenes. But on Saturday evening, they were front and center as more than 20,000 viewers from around the world tuned in to watch the livestream, via Facebook, YouTube, and TheDivineMercy.org.

The viewers have Br. Mark to thank for the livestream.

Since the worldwide coronavirus pandemic hit last spring, it was he who researched how to bring the daily Masses and devotions to the world via livestream. He’s been the man in the choir loft making it all happen ever since.

Furthermore, his skills proved critical for the founding several years ago of the Marians’ not-for-profit Divine Mercy Art, a hugely popular ministry that creates gallery-quality religious artwork practically at cost. Primary among the ministry’s goals has been to get the Divine Mercy Image into every home. The Image is a source of grace that the Lord wants venerated throughout the world (see Diary of Saint Maria Faustina Kowalska, 327 and 47).

Those are only two of Br. Mark’s many achievements that have amplified the Congregation’s spiritual outreach. Born and raised in Florida, he earned an architectural degree and worked two decades as a director for Florida’s largest architectural firm.

“By most people’s standards, I had a pretty comfortable life: a well-paying job, a house on the beach, good cars, boats,” Br. Mark recalled, during an interview on EWTN’s Divine Mercy Sunday broadcast back in 2013. “In 2012, I was in my office, in a high-rise, overlooking the traffic jam of Tampa, and I asked myself, ‘Is this really all there is to life?'”

At the time, he was tithing to the Marians’ seminarian fund and would receive Marian Helper magazine. In one particular issue, he was moved by a story on the evangelization efforts of Fr. Michael Gaitley, MIC, who served at the time as director of the Association of Marian Helpers.

“It seemed like he may need some help,” Br. Mark recalled.

He contacted the Marians, and in 2012 he initially became what’s called a “lay aggregate,” working, praying, and living with the Congregation.

Upon his profession of first vows in 2017, he became “Br. Mark Fanders, MIC.”

As for Br. David, he’s originally a farm boy from Michigan who first professed perpetual religious vows with the Oblates of the Virgin Mary in 1986. He came to the Marian Fathers in 2014 to work with the Marian Missionaries of Divine Mercy, doing street ministry and helping with the Missionaries’ construction and farming needs.

Why join the Marian Fathers?

“Well,” he said, “it’s a Polish order, and I’m of Polish descent. But also, I just found that the Marians’ charism stuck with me a little better — the Congregation’s Divine Mercy ministries, the street ministry, the farm work, praying for the souls in Purgatory, and devotion to the mystery of the Immaculate Conception.”

Father Gaitley, who leads the Marian Missionaries of Divine Mercy, referred to Br. David as a great mentor for the many young men and women who give up a year of their lives to serve others and grow in their faith.

“Never in my life have I seen someone work so hard as Br. David, who is constantly building walls, fixing tractors, planting crops, or teaching Missionaries what seems to be unparalleled practical wisdom,” Fr. Michael said.

By professing perpetual, or “final” vows, the two men have pledged on their honor to perpetually live “in conformity to the life of Christ, who was poor, chaste, and obedient.” For them, the Marian motto, “Pro Christo et Ecclesia” (For Christ and the Church), aren’t merely obscure Latin words on a Congregation’s official crest, but rather serves as an invitation to take action — an action of surrender and assent to a code of life whereby they will strive to do all for Christ and His Church.

The readings for the Liturgy underscored this commitment.

From the first reading, the Lord gives the prophet Elijah the grace and physical sustenance needed to continue the arduous and seemingly impossible task to bring God’s Word to a people who have forsaken the covenant (1 Kings 19:4-9, 11-15).

From the second reading (Rom 12:1-13), St. Paul urges the Romans to “not conform yourselves to the age but be transformed by the renewal of your mind, that you may discern what is the will of God, what is good and pleasing and perfect.” Saint Paul advises that the children of God joyfully use whatever special talents they may have toward building up the Kingdom of God on earth.

“Do not grow slack in zeal, be fervent in spirit, serve the Lord,” St. Paul writes. “Rejoice in hope, endure in affliction, persevere in prayer. Contribute to the needs of the holy ones, exercise hospitality.”

From the Gospel of Luke (1:39-47), we have Mary’s Visitation and Elizabeth’s declaration that Mary is “Most blessed … among women, and blessed is the fruit of your womb.”  And, indeed, the profession of vows took place on a Marian feast day — the Feast of Our Lady of Guadalupe. Like all the Church-approved Marian apparitions, Our Lady of Guadalupe proves she wishes to act in history, to show the world that she is real, that she cares for her spiritual children, and wishes to lead us all to the Father.

“The Blessed Mother, the Mother of God, is a great strategist that will overcome all human brokenness, evil, all the complications of human life, because she’s a mother who cares,” said Fr. Kaz in his homily.

The profession of vows also took place in the 350th anniversary year of the founding of the Marian Fathers by St. Stanislaus Papczynski.

“He promised that he would promote and preach and teach and guide others, that all would come to know the mystery of her Immaculate Conception — this mystery of God’s love and mercy given to her and given to us through her, the mystery of salvation,” said Fr. Kaz, the provincial superior of the Marians’ province that includes the United States and Argentina. “It is God’s love and mercy manifested in her life, which preserved her from original sin, but which also gave birth to our Congregation.

“We carry her name, not because we have become perfected already, but because we are continuously in need of that perfection,” Fr. Kaz said.

Turning to the two men, Fr. Kaz said, “For both of you, every task is not ‘work,’ but rather it seems to be some form of fulfillment. …. You both see that our lives are a gift that we are to return any way that we can.” Father Kaz said, “May the Lord give you the grace that you may fulfill His will. … We are to serve God. We didn’t choose; God chose us, not because we are perfect. … We have Our Lady to assist us; the Holy Spirit to guide us; the gift of conscience to remind us. We have our brothers to push us. We have the people of God who remind us we are to be consecrated. We have to preach and teach not only through words, but through actions and witness. May the Lord give you that grace to fulfill the Word of God.

By professing perpetual vows, Br. Mark and Br. David have died to self in order to live in Christ. After professing their vows, they were led to the altar where they each signed their name to the official document containing their vows and oath of perseverance.

With beaming smiles, both men then looked out to their assembled Marian brothers who applauded them.