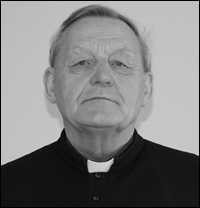 Poland, Licheń: In the early hours of December 12, 2020 – the memorial of Our Lady of Guadelupe – Father Jan Wojtkiewicz, aged 88, passed away. He was a religious for 70 years and a priest for 62.

Father Jan Wojtkiewicz, son of Jósef and Anna nee Łagusznik, was born on August 10, 1932, in the Królewszczyzna region of the district of Dzisna, in the Province and Diocese of Vilnius (now located in Belarus.) He also completed the first grade at the local elementary school there. Shortly before the beginning of World War II, the family moved to the town of Nadzieja, in the district of Bracław. During the war, Jan completed additional three grades of elementary school, of which the 2nd and 4th grades were taken in a Russian school.

In 1946 his family went to settle in the town of Biskupiec in the district of Reszel of the Olsztyn Province in the Recovered Territories (or Regained Lands). From 1946-1949, Jan attended school and, having completed the 9th grade, obtained a certificate of completion, upon which, in 1949, he joined the Congregation of Marian Fathers. On August 15, 1950, having completed his novitiate, he made his first profession of vows in Skórzec. Next, in 1950-1952, he continued his education at the Bielany school, where he obtained first his high school certificate and then in 1952-1953, began his first year of philosophy there. In 1953-1954, while on a break from studying, he worked at the parish office of Our Lady of the Lourdes parish at Wileska Street in Warsaw. From 1954-1956, he completed his second year of philosophy and the first year of theology in Gietwzwałd. He made his perpetual vows on August 15, 1955. From 1956-1959 he completed his theology studies in the seminary in Włocławek.

On June 22, 1958, Bishop Antoni Pawłowski, the Ordinary of Włocławek ordained him to the priesthood while he was still a fifth-year student of the local seminary. After graduating from the seminary, he made a period of pastoral study (tirocinium) with the Conventional Franciscans in Krakow.

Father Jan’s first pastoral assignment was to Grudziądz where he served from 1960-1961 as a catechist. In 1961-1962 he was the prefect of seminarians in Warsaw-Praga and then in 1962, he returned to Grudziądz to work pastorally at the parish there. During the following years (1963-1964), he spent his time as a pastoral assistant in Skórzec. Transferred to Warsaw-Praga, he ministered there from 1964-1967, while also working on obtaining a State-approved high school certificate. Transferred to Sulejówek, in 1967, in addition to his pastoral duties, he did a preparatory course to enter the Architectural Department of the Warsaw University. From 1968-1972 he ministered in Licheń. During the following three-year period (1972-75) he served as a chaplain of a hospital in Bielany-Warsaw. In 1975 he was sent to Rdzawka, where he served as a catechist and the rector of the church in Obidodwa (1975-81). From 1981-1982 he was a catechist and pastoral assistant in Stoczek Klasztorny. From 1982-1984 he ministered at Warsaw-Stegny, from where he was transferred to our seminary in Lublin, serving there as a house treasurer until 1986. In 1986 he went back to Licheń, where he served for two years as a confessor at the Shrine of Our Lady of Licheń. During the following two years, he served at the Shrine of Our Lady Mother of Peace in Stoczek Klasztorny; in 1990, while formally remaining a member of the house in Stoczek, he went to work pastorally in the land of his birth, which he had left 45 years previous, and which was formerly known as Vilnius region but being now a part of Belarus. From 1990-1992 he served in Orsha and from 1992 to 2001 he was the pastor of Hermanoviche and Luzhki in Belarus. In 2001 he was transferred to work pastorally in Podswile, and a year later he was sent to our house in Druya, where he served as vicar in the parishes of Itolta, Druya and Powiacie. In 2005 he was transferred to work at the Shrine of Our Lady of Licheń, where he zealously served in the confessional until the end of his life.

1The Recovered Territories are the territories of the former Free City of Danzig in pre-war Germany that became part of Poland after World War II, at which time their former German inhabitants were forcibly deported. The rationale for the term “Recovered” was that these territories formed part of the Polish State, and were lost by Poland in different periods over the centuries. It also referred to the Piast Concept that these territories were part of the traditional Polish homeland under the Piast dynasty, after the establishment of the state in the Middle Ages (Wikipedia).
pfinley2020-12-23T15:06:10+01:00
This website uses cookies. By continuing to browse the site, you are agreeing to our use of cookies
Go to Top