Skip to content
Double Jubilee for The Marians in Portugal

Double Jubilee for The Marians in Portugal

Aerial view of the monastery in Balsamão.

On May 1, 2004, all Provincial Superiors and guests participated in special ceremonies commemorating 250 years since the Marians began their apostolic work in Portugal, and 50 years since their return to Balsamão. To better understand this double Jubilee a brief historical sketch is in order.

Interior of the Marian Shrine in Balsamão.

It was in 1754 that the Marians planted the seeds of the Order. Already in 1753 Venerable Casimir Wyszynski had taken initial steps in this regard. After encountering many difficulties, Fr. Casimir met a certain Joao de Deus and on March 25, 1754 accepted him into the Marian Order. With the help of this first Portuguese vocation, and with permission of the local bishop, Joao da Cruz, and agreement with the Tertiaries of St. Francis living in Balsamão, he incorporated them into the Marian Order on Sept. 4, 1754. Thus, the first Marian monastery in Portugal had been founded. The mortal remains of Fr. Wyszynski are entombed in the church of the monastery, and the room where he died is visited by pilgrims who pray for his beatification. 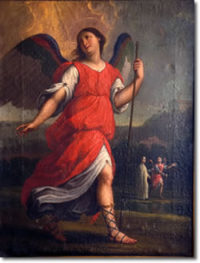 A painting symbolizing a journey of Fr. Wyszynski to Balsamão. A Servant of God is guided by Archangel Raphael.

Balsamão traces its history to the Moors who invaded the Iberian peninsula. In need of suitable places for fortifications, the Moors came upon one such place in the mountains of northern Portugal. Encircled on three sides by small rivulets, the place was beautiful in itself. The Moors built an impressive fortress together with a mosque. The high walls around the fortress prevented easy access. The top of the fortification commanded a panoramic view for miles and miles around.

Based on tradition there was at one time a fierce battle between the Christians and Moors. The Christians promised Our Lady to build a chapel in her honor and establish a monastery in the castle if they should win. Their prayers were answered! Victory was theirs and eventually a monastery was built on the ruins of the castle. Crowds began corning to the shrine to pray to the Virgin Mary, who became known as Our Lady of Balsamão, the Heavenly Nurse.

In time, as indicated above, the Marians lived and worked in Balsamão until 1834, when the Portuguese Government expelled all religious Orders and confiscated their monasteries. One Marian priest, Fr. Jose da Cruz along with Bro. Antonio de Sao Luis were granted permission to serve pilgrims coming to the shrine. Soon Fr. Jose was alone, but he remained there until 1851 when he presented the liturgical vestments and sacred vessels to the Bishop of Braganca and went to live with his family in the nearby village of Lagoa where he died about the year 1856. With his departure the church was closed and the monastery gradually fell into ruin. In 1880-1882, the entire hill was acquired by the family of Dr. de Menenzes Cordeiro. He lived to see the day when the Marians returned to Balsamão 1954.

A miraculous statue of Our Lady of Balsamão.

The actual festivities of the double Jubilee were well organized. The Bishop of the Diocese of Braganca presided and stayed with the people from early morning until evening. A Marian Father was requested to bless the beautiful huge statue of Venerable Casimir Wyszynski in the Square of the church and monastery.

On the days following the celebration, the Marian guests had the opportunity of visiting the sites where the Marians had either foundations or spent some time in apostolic work in the past.

During the Eucharist on Saturday, May 9, our Marian community greatly rejoiced: the Lord sent us [...]