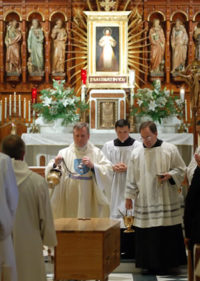 Your Excellency (Timothy McDonnell, Bishop of Springfield, Mass.) I would like to thank you for celebrating this liturgy today for our dear brother, Mark. The motto of our Congregation is “for Christ and the Church,” and it means a great deal to us to have our local Shepherd with us during this difficult moment for our community. I would like to offer my sincere condolences to Mark’s brother Bruce and his sister-in-law Lynne and to all of Fr. Mark’s relatives and friends who have come from near and far, and to our confreres in the Mother of Mercy Province. I thank you all for your presence here today. It is a testimony to how much Mark meant to all of us. In a special way I want to greet Marie Romagnano and Judy Ryan, and I want to thank you both for the extraordinary care you gave our brother. I would also like to thank the Oblates of the Virgin Mary for the hospitality you showed Mark during his treatments in Boston. I want to thank all my Marian confreres for all you did for Mark at the time of his illness. In a special way, I have to thank Fr. Kaz Chwalek and Br. Jason Lewis.

Today, I want to give thanks to God for the great gift Fr. Mark Garrow has been to our Congregation. Without his presence, our Congregation would be very different today. As I stand here near the casket of my brother and dear friend, our former General, with whom I served for six years very closely, the first Provincial of the united Province, it is difficult to hide my sadness and not to raise the question why? Yet, at the same time, I feel that even though Mark’s life was too short, it was complete. He accomplished God’s plan with love and witnessed giving everything to God. Mark fulfilled his mission even though we thought it would be done in a different way. And for this reason during this funeral Mass, despite the natural sadness that we have, we feel also the presence of the Risen Lord and His peace.

During this past year of Mark’s suffering, our Community and many of our lay cooperators had been praying fervently for a healing for Mark. I know a woman, confined to a wheelchair, who privately offered her life to the Lord so that Mark could live. After making that offering, she suffered terribly, physically and spiritually. After Mark died, all her suffering ceased completely. This was a sign that God had accepted her suffering but that He had a different plan for our brother Mark. I am sure our prayers were not in vain. God gave him the grace to endure his sufferings and to give us an example of self-giving love. As Fr. Joe said in the homily, I am sure his self-gift will continue to bear fruit for the Congregation and the Church. I am sure it is no coincidence that his suffering and death took place during and after the Beatification of our Founder.

I had the privilege to meet with him recently for three days. I was amazed at the strength the Lord gave him for our talks just prior to his final failure of health. He asked me in detail about how the Marians were doing throughout the world. I told him that I was on my way to do the Visitation of our seminary in Lublin, Poland. I asked him what advice he had for them there. He didn’t say anything for a long time, and then he said: “Tell the formators to love the young men in formation.” Then he said: “Tell the young me to love their religious vocation. It is a gift from God. If they don’t love their vocation, they will not be able to see it as a gift and to grow in it as God wanted them to.” I think this summarizes Fr. Mark’s life. He lived for many years as a formator and a Superior in our Community, and I think those who lived and worked with him felt loved by him. He also loved his Marian vocation. He loved the community, and he loved his brothers. I dare say that when he was the Superior General he touched the lives of every Marian throughout the world with his love and compassion.

I was very impressed recently when I visited Stockbridge to see the extreme care the seminarians and all of the Stockbridge community have shown to our brother in his time of need. One of the seminarians shared with me that the seminarians were aware that the end was coming close for Fr. Mark They wanted his legacy to be that love which he had demonstrated in accepting his sufferings and in offering it for the community, as well as the way he had always treated his brothers, would now become incarnate in the way they treat each other, so that Mark’s spirit would truly live on in the Province.

I would like to say a word to my confreres in the Province of the Mother of Mercy. Exactly one year ago, we gathered downstairs in Memorial Hall for the first Provincial Chapter of the unified Province. The large Image of The Divine Mercy was present throughout the Chapter just behind the table where we sat. From the beginning till the end of the Chapter, I truly felt the presence of our Lord watching over us and blessing our efforts. This past year has been an extraordinary year of grace for the new Province. Father Mark has literally laid down his life as an offering for the community. I want to say to you now that our Lord will not leave you orphans. We have lost a great leader, but God has a plan for this Province. I believed it last year, and I believe it even more now. Our Mother of Mercy is interceding for you, and our Lord will continue to bless you with His great mercy. In the name of all of the members of our Congregation, thank you Mark for giving the majority of your life to our Community.

Thank you for your service as a formator, here and in Rome, for writing our plan of formation for the Congregation.

Thank you for your service as a local superior, a provincial superior and our Superior General.

We will miss you, but I ask you, intercede for this Province and for the Congregation, that we may truly learn to love one another, and that we may fulfill our mission foreseen by God in the Church. May you rest in peace. Amen.

Father Władysław Zdaniukiewicz, MIC, the oldest member of the Polish Province of the Congregation of Marian Fathers passed away in the evening of May 25, 2020, at the St. Stanislaus Hospice in Licheń, Poland