He was once simply Andy Davy, a fan of Spider Man, of The Muppets, of music, and of the great outdoors, who was raised in a holy household that put love of God above all things. He joined the Marian Fathers in 2003, having learned about their history and charism during a game of ping-pong with a Marian seminarian. He moved into the Marian House of Studies in Washington, D.C., where he promptly placed on his wall a replica of the sword of Lord of the Rings‘ hero Frodo, an emphatic act that put his fellow Marians on notice that he was a warrior for Christ — and a fun guy to have around.

He became Br. Andy Davy, MIC, in 2004, a self-described “mamma’s boy” — Our Blessed mother’s boy, that is— who had come to know Jesus through the Blessed Mother, “through the one who knew Him better than anyone,” he says. In January 2009, he became Deacon Andy Davy, MIC, dreaming of the priesthood, of being a teacher, preacher, and shepherd, of following in the steps of his heroes — super or otherwise — who eschewed the easy life, who offered their life as a sacrifice for the sake of others.

On May 30, 2009, with somewhere between 750 and a 1,000 people present — fellow Marians, friends, and family — Deacon Andy Davy, MIC, became Fr. Andy Davy, MIC, ordained to the sacred priesthood in his home parish, St. John Neumann, in Gaithersburg, Md.

And the world has become a better place as a result.

Before his hands were anointed in the sacred oil, he received some advice from the principal celebrant of the ordination Mass, the Most Rev. Martin D. Holley, auxiliary bishop of the Archdiocese of Washington, D.C. In his homily, Bishop Holley said:

May your faith and witness to the mercy and love of God in Christ Jesus, strengthen you for the rest of your priesthood. …

Let your duties absorb you, and be conscious of yourself and your teaching at all times, depending on the grace of God, through the intercession of the Blessed Virgin Mary, and the Lord’s Divine Mercy. …

And like your founder, Blessed Stanislaus Papczynski … continue to be an apostle of mercy, by your preaching and teaching, and through your love and devotion to the Blessed Virgin Mary, and your prayers for the souls in purgatory. …

Take for your example what we hear from Jesus in the Gospel of St. John, when He says, “I am the good shepherd. I know My sheep and My sheep know Me in the same way the Father knows Me and I know the Father; for this sheep I will give my life.”

In your ministry, especially to your young people, continue to reach out to them always welcoming them back to the fold, as a good shepherd who cares deeply for his sheep.

But above all, may the Blessed Virgin Mary, be your model, as one of humble service, who like her Son, Jesus Christ, came to serve, and not be served.

An Ordination with an Imprint

From the first reading, Jeremiah 1:4-9, come the words “Before I formed you in the womb I knew you …”

Father Andy, the second of five children of Deacon Michael and K.C. Davy, recalls how, when he was a boy, during Mass, just before the Consecration, his mother would put her arm around him and whisper, “Andy, prepare your heart. You know who’s coming. Remember to say, ‘My Lord and my God, I love You.”

He joined the Marians after receiving what he describes as a direct and unexpected call from God. It was in March 2002. He was a junior at Catholic University in Washington, D.C. He went to Holy Mass at the Basilica of the National Shrine of the Immaculate Conception on the campus of Catholic University.

“Around the time of the Consecration, I heard a voice in my soul. It went through my entire being,” Br. Andy recalled. “The voice said, ‘You could be a priest.'” He remembers thinking, “What does it mean: could?” The voice persisted. He became overcome with a feeling of peace, a peace that fills him still. He describes the peace thusly: “This is what I was created to be — a Marian, a religious, a priest.”

From the second reading, 1 Timothy 4:12-16, come the sobering words of responsibility, of not squandering “the gift you have” and of the need to set an example “in speech, conduct, love, faith, and purity.”

He was inspired to choose this passage as a result of a pre-ordination retreat. He was standing before a statue of the Child Jesus holding out His Heart. He meditated on this image.

“I felt the Lord telling me that on my ordination day He wanted to give me His Heart so that as I’m ordained a priest, I can love with His Heart and minister to the people and put the message of Divine Mercy into action,” Fr. Andy says. “He was encouraging me to live within His Heart and to never neglect this great gift I’ve been given.”

And from the Gospel reading, John 10:11-16, Christ calls Himself the “good shepherd” who “lays down His life for the sheep.”

“That’s my model,” says Fr. Andy. “The Good Shepherd leads with a strong gentleness, and with a self-sacrificial love that teaches me that my life must be lead in service of others.”

An Ordination as Super Soaker

It’s no surprise that Father Andy, a personable guy if there ever was one, would have weekend’s worth of celebration stamped with a personal touch.

His brother Paul’s country-bluegrass-folk band, Sligo Creek Band, played at the reception. His friend, the Marian seminarian Steve Ybarra, made a cake to feed 750. It was a work of architecture as well as baking (though it did eventually sink under its own weight).

Father Andy specifically requested the ordination be held in his home parish, the parish in which he was baptized, “to maximize the effect it could have on people,” he says.

He explained, “Something happens during an ordination. There’s just a tidal wave of blessings that go forth.”

He made it a special point to invite the school children from the nearby Mother of God Community, an ecclesial movement in the Catholic Church. He was raised in the community and his mother is an elementary schoolteacher there.

“I was especially aiming the ordination at the children, like a Super Soaker,” Fr. Andy says, laughing.

At his first Mass the following day, he drew upon an ancient tradition when he presented to his mother the manuterge, the cloth within which his hands were wrapped during the Anointing of Hands at the ordination. As tradition holds, upon her death, his mother will be buried with the cloth as a sign she was the mother of a priest.

“It was a powerful moment,” says Fr. Andy. “I am just so grateful to my mom and dad for their great witness.”

For the first Mass, he wore the chasuble given to him through the vocations committee of St. John Neumann’s. It’s emblazoned with an image of Our Lady of Guadalupe.

“She’s a very important figure for the Hispanic community, which I hope to really reach out to as a priest,” says Fr. Andy. “She’s also the patroness of the unborn, which is very important.”

The chasuble was purchased through an “Eat for Andy” fundraiser.

‘I Wasn’t Expecting That’

Among the many things about the weekend that he’ll never forget:

“I had peace in my heart,” Fr. Andy says. “Bishop Holley even noticed and said, ‘It looks like the graces are already operating.'”

And during the Litany of the Saints — when all the saints are individually invoked to pray for the man to be ordained — a strange and deeply comforting thing occurred.

“I had a real sense of whenever one of the saints was invoked, it was as if each one was laying a hand upon me, the whole communion of saints, praying over me and asking for the Holy Spirit to come,” he recalls. “I wasn’t expecting that.”

Father Andy will spend several months helping to serve in the Marians’ new mission in the Philippines. He will return to the United States in November where he will serve at St. Mary’s, the Marian-administered parish in Plano, Ill.

His goal as a priest? In his own gentle, searching, disarming words:

• To imitate that Good Shepherd who first loved me;
• To live a life of thankfulness to God;
• To live The Divine Mercy message and to allow it to touch others through me and through the priesthood;
• To console the merciful heart of Jesus;
• To allow the mystery of the Immaculate Conception to be a guiding star;
• To preach the hope that comes from Christ, especially in this culture right now, which is suffering from so many fears, uncertainty, and darkness; and
• To be able, as a priest, to help people encounter the real love of the Merciful Savior.

He is Fr. Andy Davy, MIC: teacher, preacher, and shepherd. Christ is the fixed point by which this new Marian priest seeks to bring God’s people home. 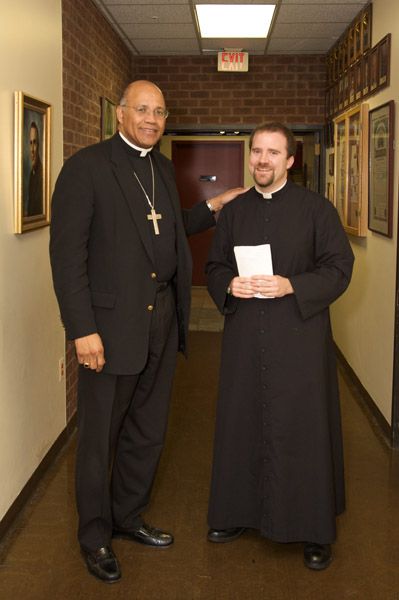 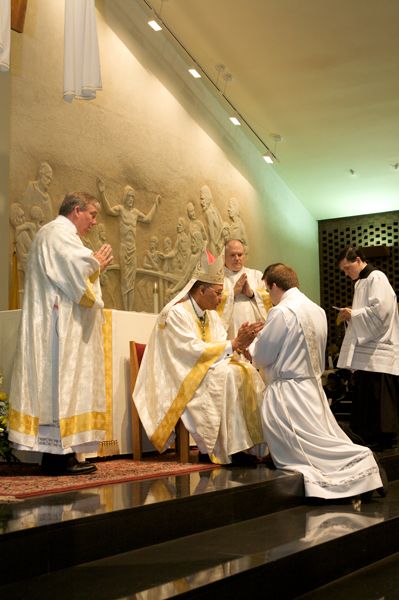 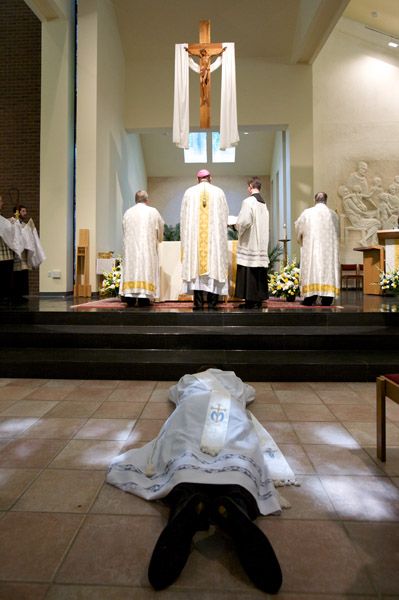 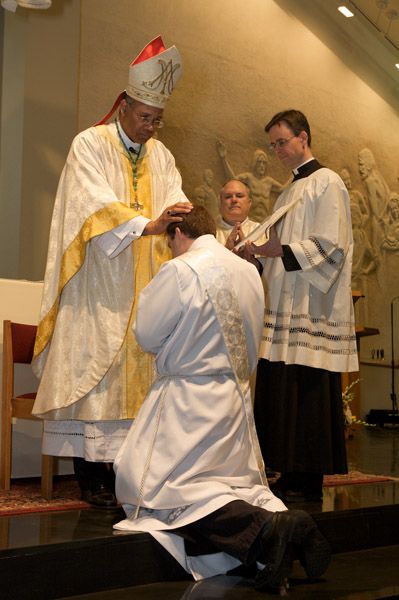 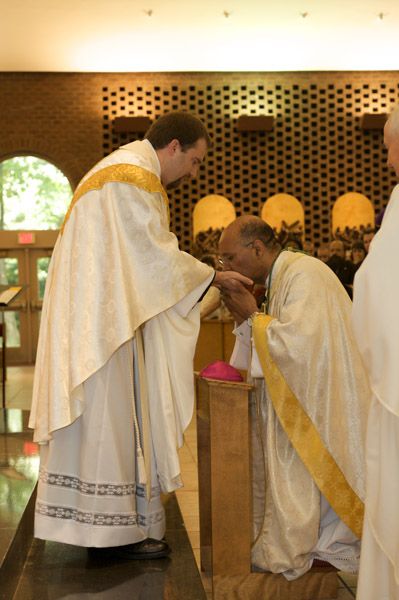 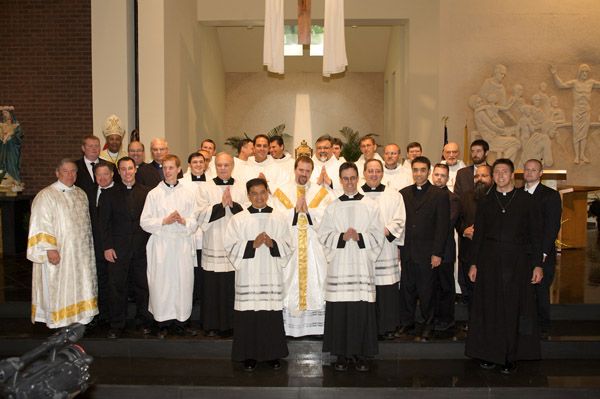 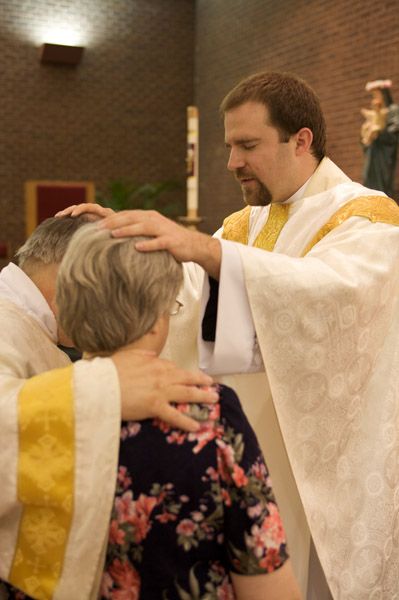 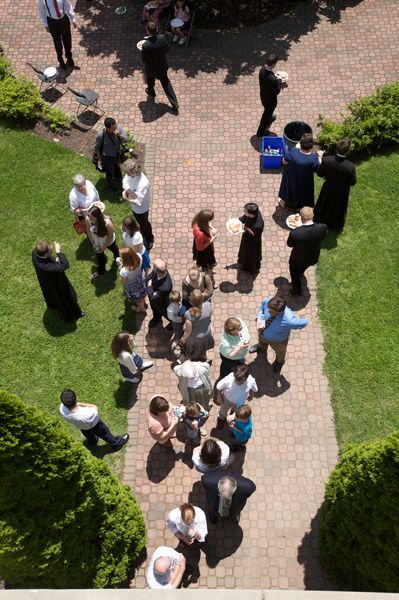 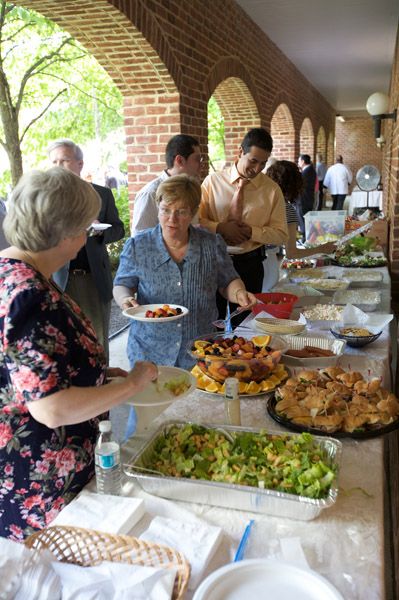 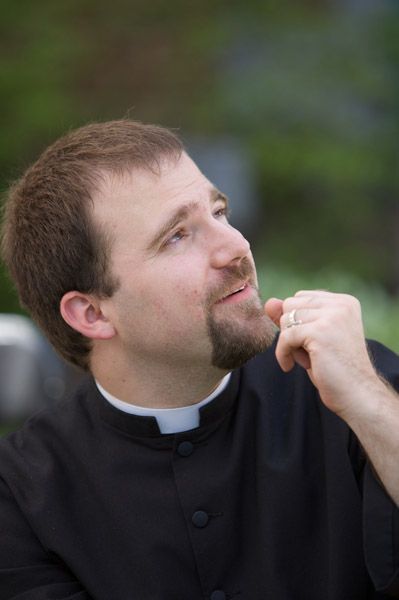 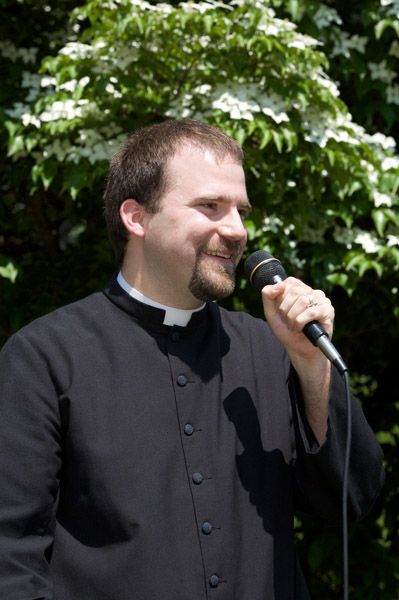 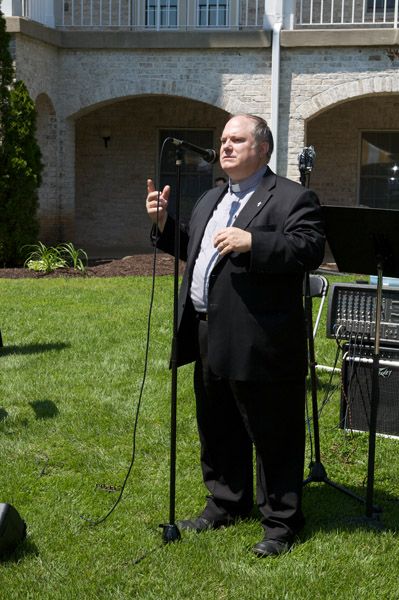 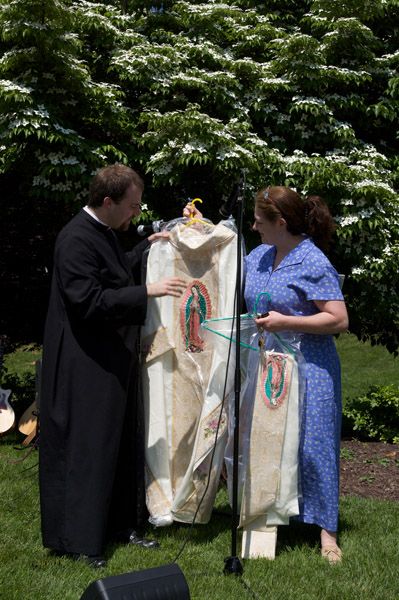 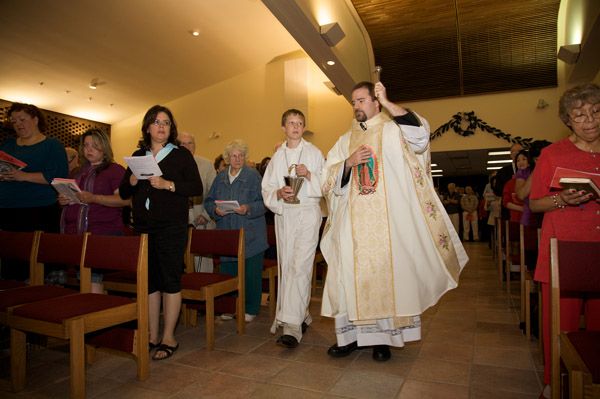 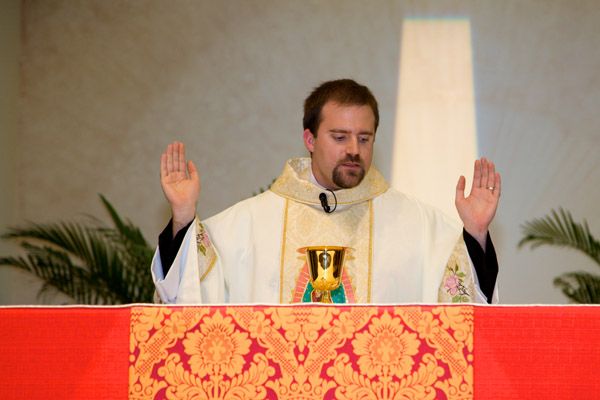 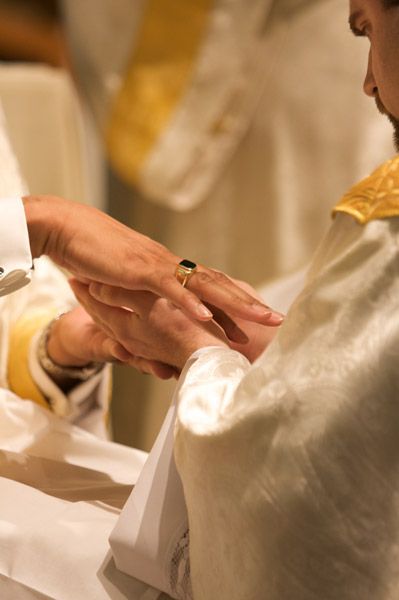 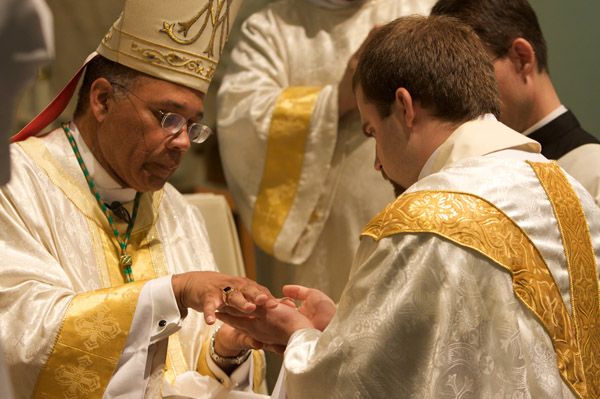 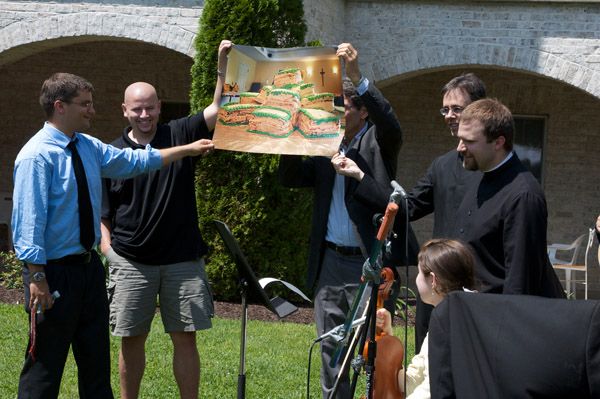 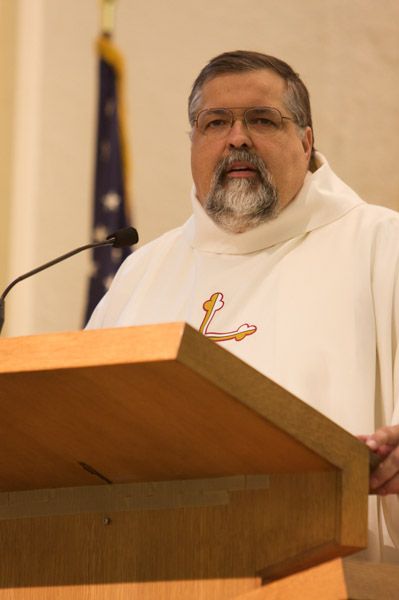 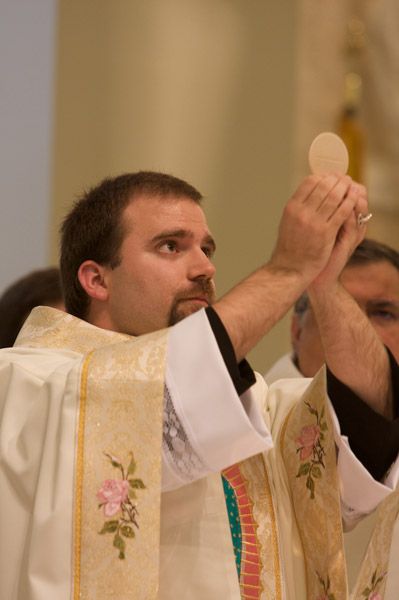 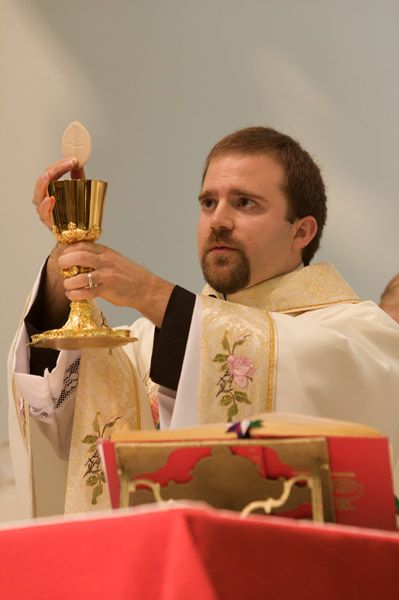 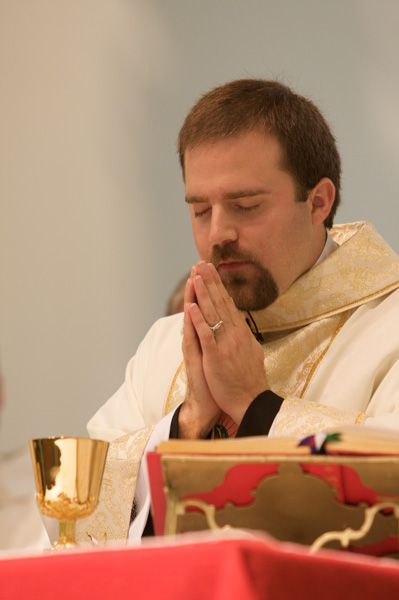