The solemn unveiling of the commemorative plate dedicated to the chaplain of the Polish Army, Blessed Michael Sopočko, took place on the first anniversary of his beatification – Sept. 27, 2009, at the Marian church on Marymont. The event, organized by the Parish of Our Lady Queen of Poland in Marymont along with the Council for Preservation of Remembrance of Battles and Martyrdom and the Office for National Security, was under the honorary auspices of the President of the Republic of Poland and Head of the Armed Forces, Lech Kaczyński. Field Bishop of the Polish Army, division general Tadeusz Płoski will preside over the Holy Mass, during which Blessed Michael Sopočko’s relics will be presented to the parish.

On Aug. 28, 1909, Blessed George Matulewicz made his religious vows in the Congregation of Marian Fathers. This event opened a new chapter in the Congregation’s history. Its members settled at the post-Camaldolese monastery, in the Bielany Forest, and took under their pastoral care the residents of Bielany and Marymont. Near Bielany there were the ruins of Queen Maria Casimera’s summer residence. There, on Feb. 2, 1916, the Marians opened a chapel for the Marymont residents. The chapel had only one altar, which had a copy of the image of Our Lady of Częstochowa. 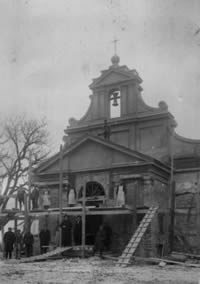 Reconstruction of the chapel (1924)

Father Sopočko – a priest from the diocese of Vilnius – resided in Poland in 1918–1924. He provided pastoral care to the Polish Army members at the chapel established by the Marians in Marymont. Thanks to Fr. Sopočko’s efforts, the chapel underwent extensive reconstruction according to plans made by Lieutenant-Colonel Henrych. Lieutenant-Colonel Pawłowski directed of project, while Lieutenant Gruszczyński was the site manager. Ready-made components – a classic tympan and a Baroque attic – were used, thus givting the building a sense of majesty. All works were finished on Nov. 16, 1924. Field Bishop of the Polish Army of the day, Stanisław Gall, blessed the chapel in the presence of the generals, officers, soldiers, and residents of Marymont. The Marians established at this chapel a branch of their Bielany parish. This was the first Polish shrine under the title of Our Lady Queen of the Polish Crown. The bell for the parish was offered by the Military Bishopric Curia, thanks to the kindness of Bishop Stanisław Gall.

Polish army officers in front of the church on the day of its blessing.

Father Sopočko’s cooperation with the Marians did not end on Marymont. He stayed in touch with the Congregation after going back to Vilnius. It was a Marian, Fr. Józef Jarzębowski, to whom Fr. Sopočko, the confessor of St. Fausina Kowalska, passed in great confidence his work on the Divine Mercy, asking him to have it printed abroad. Father Józef Jarzębowski was the very priest thanks to whom the Divine Mercy devotion came to America. Thanks to his initiative, the St. Felix of Cantalicio Sisters printed the Novena, Litany, and Chaplet to The Divine Mercy in Polish. Graces, which people began to receive through entrusting themselves and their concerns to The Divine Mercy, were at the base of the Marians’ decision to spread devotion to the Divine Mercy in the United States and to publish prayers and prayer cards with the image of the Merciful Jesus.

In the year of the 100th anniversary of Renewal of the Congregation of Marian Fathers we celebrate the graces that  God showers on the faithful through the years. The celebration on Sept. 27 on Marymont gave thanks to God for the service of Blessed Michał Sopočko who was ministering in our shrine. Anna Walentynowicz began the initiative of establishing a commemorative plate there. The plate, financed by the Council for Preservation of Remembrance of Battles and Martyrdom, was created by a professor of the Academy of Fine Arts (Faculty of Sculpture) Aleksander Śliwa. The plate will be located on one of the pillars inside the parish church of Our Lady Queen of Poland in Marymont, at 6a Gdańska Street so that it would be visible for people entering the church.