When Br. Angelo Cada Casimiro, MIC, professed his perpetual vows as a Marian on Aug. 16 in a liturgy celebrated at the National Shrine of The Divine Mercy, Eden Hill, Stockbridge, Mass., he used the artistic skills honed as a member of the laity to design and illustrate the morning’s program booklet.

In the program’s “Welcome” section, it says, “The perpetual profession of vows, also known as perpetual or final vows, is the last step in joining a religious congregation.”

The Very Rev. Fr. Dan Cambra, MIC, provincial superior of the Marian Fathers of the Immaculate Conception in the United States, begged to differ. He said in his homily that it isn’t the “final” step. It’s the “next” step. The final step, he posited to chuckles, is more like death or, beyond that, standing before God to give our accounting.

A Life ‘Set Apart by God’

The program notes also define “consecrated” as living a life “set apart by God in order that, like the apostles, [a person] may be totally dedicated to God and may draw closer to Him through prayer, love of neighbor, and apostolic works.”

That, in a few words, describes the life Br. Angelo has chosen — or chosen for him by God, as he would say. Sitting in the first two pews to the right of the aisle facing the altar were Br. Angelo’s family. His family includes his father Ariel Casimiro, Sr.; his brother Ariel Casimiro, Jr. and Ariel’s wife, Ledda Casimiro; his sister Cecilia Casimiro Groves and her husband, David Groves, and their chidren, Shawn Groves and Patrick Groves.

Brother Angelo’s mother, Susie Cada Casimiro, died Dec. 1 last year, and he co-dedicated his program to “the loving memory … of my beautiful mother, who gave me life and who passed on the Catholic faith to me.”

Given the faith, hope, and charity on display at the Shrine for Br. Angelo’s final vows, it’s a good bet that Susie had the best seat in the house.

To the left of Br. Angelo were his Marian brothers. Father Andy Davy, MIC, and Fr. Bob Vennetti, MIC, acted as personal witnesses as Br. Angelo knelt before Fr. Dan, vowing to God to live a life of “chastity, poverty, and obedience forever.” At these words, Br. Angelo kissed the Gospel book.

“And I,” Fr. Dan replied, “in the name of the Church and our fraternal community, receive your vows, and — if you keep them — on the part of Almighty God I promise you eternal life.”

Words such as “forever” and “eternal” perfectly point to the meaning of such a milestone occasion.

“I can’t help but think back to when I first heard we had two guys from California, both Filipinos as well, wanting to join the Marians,” Fr. Dan said in his homily, referring to Br. Angelo and Br. James Cervantes, MIC. Father Dan said he related to this because he was the first of Portuguese descent to join the congregation.

“It’s important to ask why God gave us these two guys,” Fr. Dan said. He said it had to be related to the Marians’ mission in Oceania. “It seems a sign from God for our Philippines’ mission.” India, he also said, is “on the horizon.”

“I’m grateful that Jesus led Angelo to the Marians,” Fr. Don said, “because not only is he a good, humble man, but he’s also a gift to the community with all the skills he has, for example as a graphic designer. And also, as Father Provincial was saying, Br. Angelo’s vocation for the Marians is a prophetic vocation for our involvement in the Philippines. It’s amazing to me that God sent us two Filipino men, and after that we decided to open the Philippine mission.”

Following the Example of Christ

Father Dan noted that perpetual vows form “a new plateau” in one’s religious life, “a new beginning, of sorts.” If it is God’s will, next year Br. Angelo will be ordained to the priesthood.

“Christ is calling you, dear brother,” Fr. Dan said, “and He gives us the courage to persist through the inevitable struggles and setbacks of the religious life.”

He urged Br. Angelo to follow the example of Jesus: “Christ did not have an easy life. Marians of the Immaculate Conception cannot expect an easy life. Why should we be different from Jesus”?

Father Dan then gave Br. Angelo fatherly advice: “Take time for prayer. Give nourishment to those who hunger for spiritual food. Help the hundreds and thousands of people who come to you on their journey. Restore them to faith through your love for them and your mercy upon them. Give of yourself at least in some small measure. You will be Christ’s instrument to help those who have lost their way. You have taken upon yourself a yoke that is only made easy through Christ.”

Are perpetual vows “a final step?” Fr. Dan asked. “No. They are the next step.”

Following the liturgy, the assembled Marians sang in Latin the Marian Hymn, Mater Dei Immaculata. The final verse capped a beautiful day: Virgo virginum praeciara / nobis tessera sit cara: / Pro Christo et Ecclesia (“O admirable Virgin of virgins, / may this motto be dear to us: / For Christ and the Church”).

Read about Br. Angelo’s vocational calling in his testimony, Learning in the School of Trust. 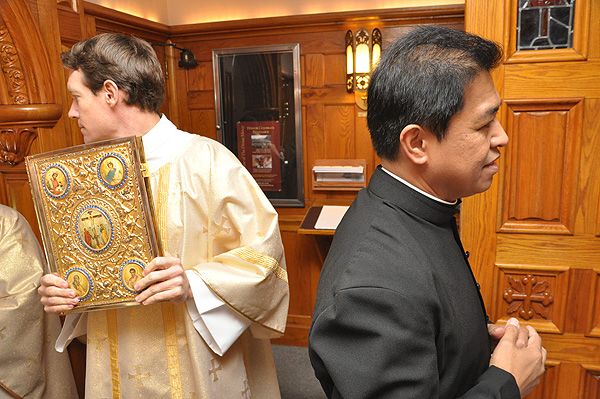 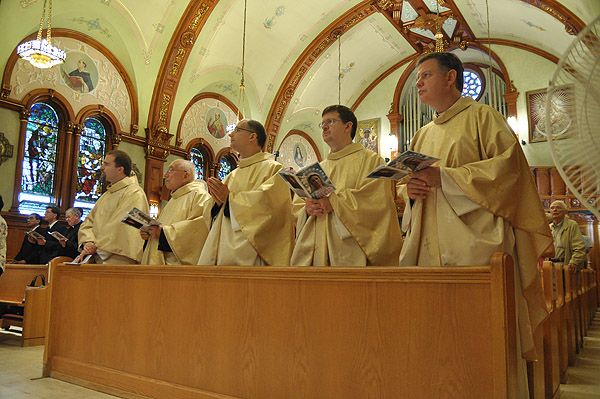 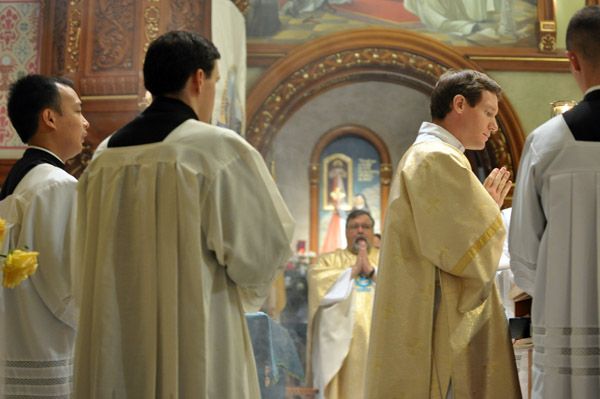 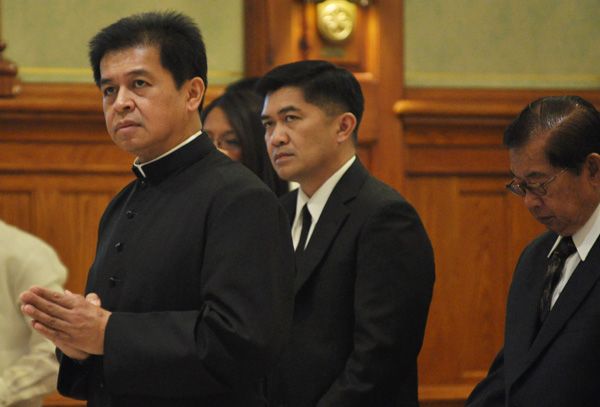 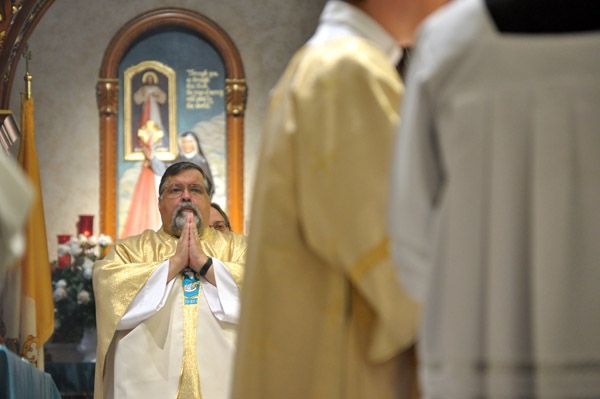 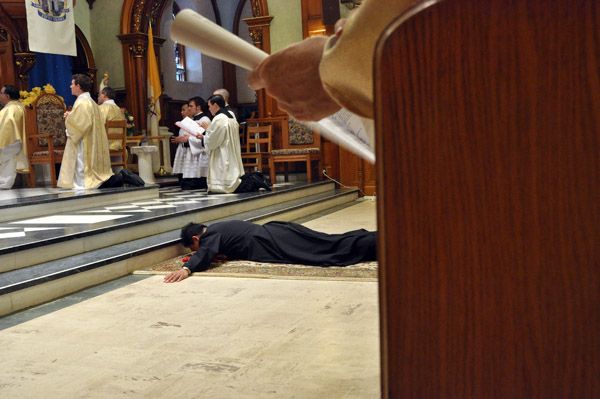 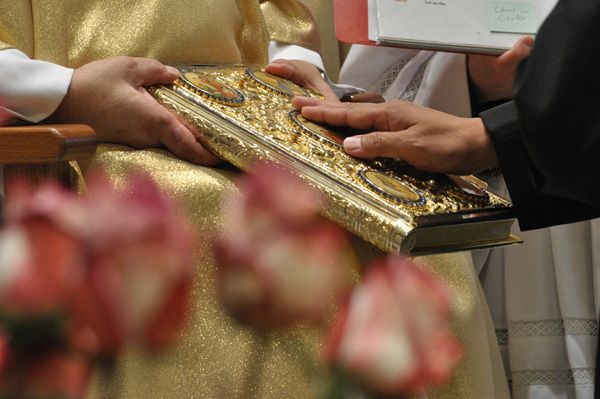 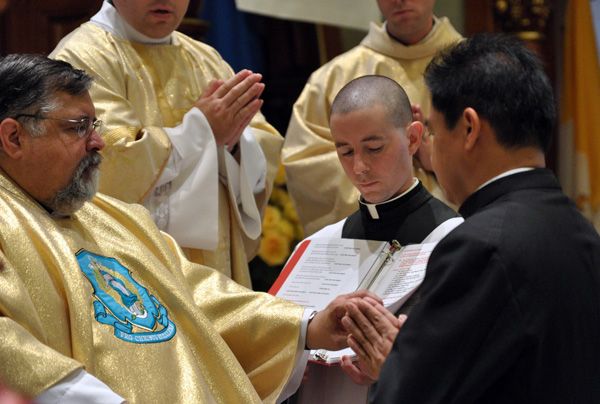 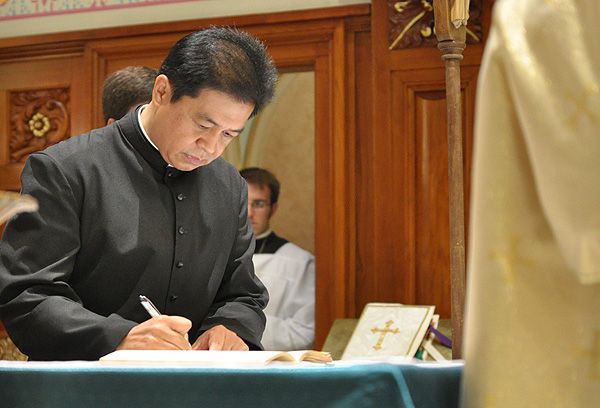 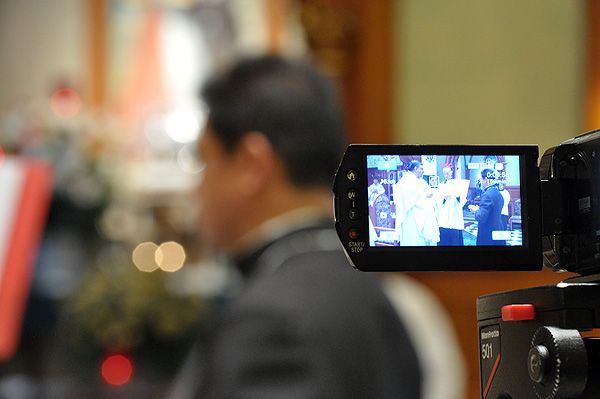 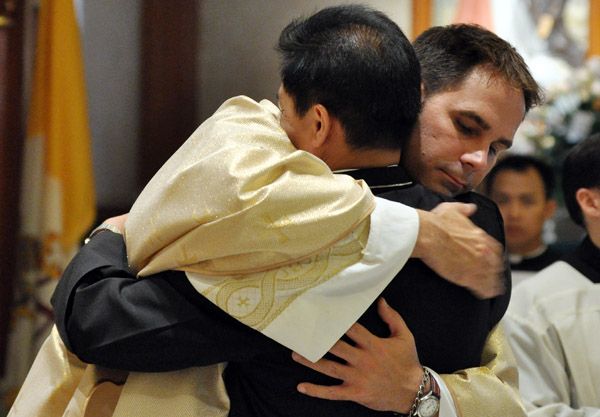 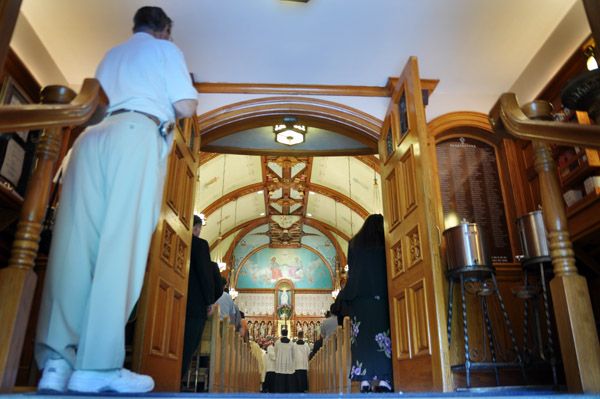 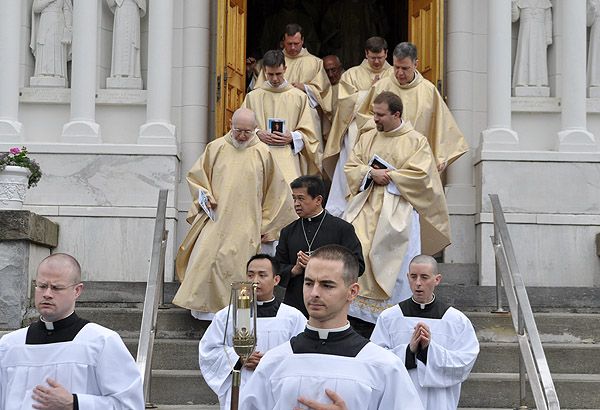 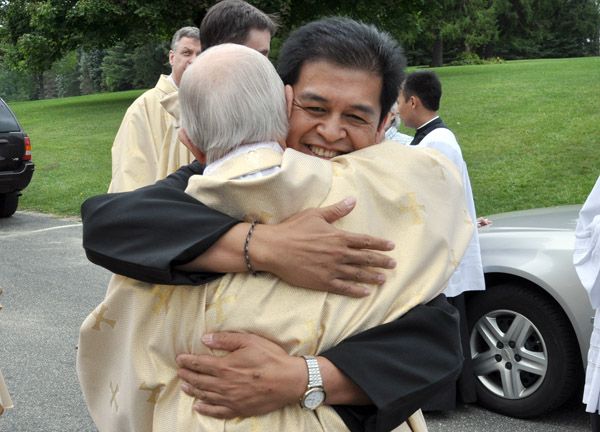 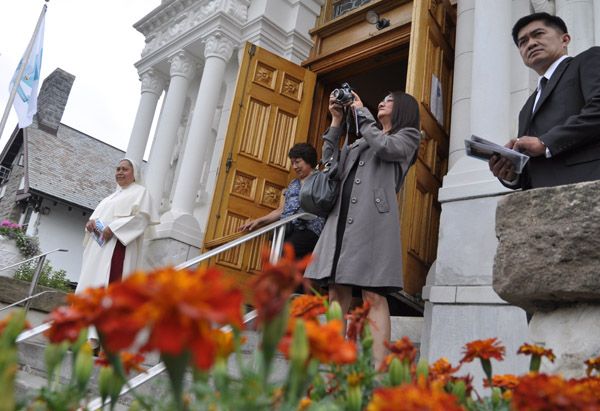 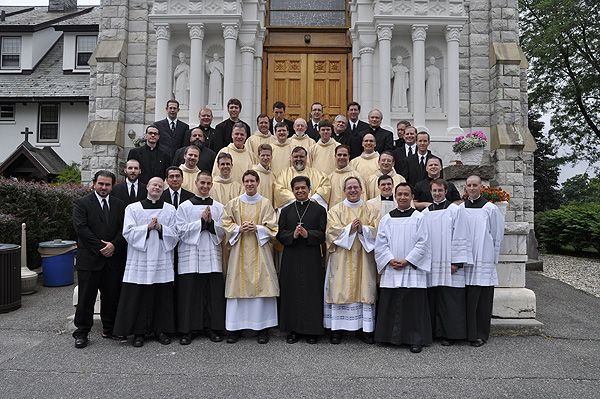 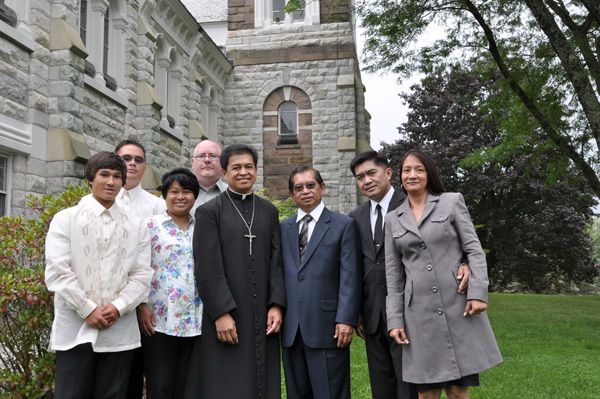