Skip to content
USA: Michael Gaitley, MIC, is ordained to the sacred priesthood

USA: Michael Gaitley, MIC, is ordained to the sacred priesthood

With a pledge to dedicate his life preaching the Gospel for the glory of God and the sanctification of His people, a “son of Mary” was raised to the sacred order of the priesthood as a Marian Father of the Immaculate Conception.

“It’s been a long road,” said Fr. Michael, 34, following the Mass. “But there have been just so many people praying and sacrificing for me along the way. I just feel grateful to them for their prayers and for their words of consolation and encouragement during these years. And I ask people to continue to pray for me — that I may be an instrument of His mercy for others.”

The Main Celebrant and Ordaining Bishop was His Eminence Theodore Cardinal McCarrick, Archbishop Emeritus of Washington. A man with an informal style and contagious smile, Cardinal McCarrick gave Fr. Michael words to live by.

Follow the teaching of the Gospel, His Eminence said in his homily, and “believe what you read, teach what you believe, and put into practice what you teach. That is the challenge of every priest. … Always remember the example of the Good Shepherd who came not to be served but to serve, to seek out and rescue those who are lost.”

Cardinal McCarrick also reflected on the Gospel reading of the day, from John 15:9-17 in which Jesus teaches His disciples the means by which to achieve joy: “Love one another as I love you.” Cardinal McCarrick implored Fr. Michael to minister with joy — always.

“There’s no room in the Church for a priest who is not joyful,” he said. “By word and example thereby build up the house that is God’s Church.”

A Marian on the Move

As everyone who knows Fr. Michael can attest, joyfulness is his hallmark. It’s been said of him that he “works like a dog but plays like a puppy.” Frisbee and skateboarding serve as ballast to the long hours he puts in of study, prayer, writing, preaching, and pastoral work.

In February, he published his first book, Consoling the Heart of Jesus (Marian Press), now in its second printing and quickly becoming a modern spiritual classic. In the meantime, he’s become a much-sought-after speaker on The Divine Mercy message and devotion. He has just recently completed a companion guide to his book.

Not least of all, Fr. Michael has already been tapped for a major leadership position within the Marian Congregation. His Provincial Superior, the Very Rev. Fr. Dan Cambra, MIC, has named Fr. Michael the next “Fr. Joseph, MIC,” to succeed Fr. Seraphim Michalenko, MIC, when the latter steps down this year. The title “Fr. Joseph, MIC,” is given to the director of the Association of Marian Helpers, the Marians’ spiritual benefit society.

For the Glory of God

From an early age, Fr. Michael seemed destined to do great things for the glory of God.

He recalls how, when he was 5-years old, he was inspired by the movie “Chariots of Fire” — particularly the scene in which Eric Liddell says, “I want to run for God.” Father Michael said he wondered at the time, “Can I run for God, too?”

Indeed, the moment proved particularly poignant when, following high school — and following a prayer for direction to St. Thérèse of Lisieux — he turned his back on an athletic scholarship at sunny UCLA and enrolled at Franciscan University in the rust belt of Steubenville, Ohio. There in Steubenville, he felt the call to give his life to God, marking the beginning of 14 years of formation, a time of faithfulness, struggles, and perseverance.

“I would tell my children, ‘Walk to the beat of a different drum,'” said his mother, Linda. “I urged them, ‘Don’t follow the way of the world, but keep on the path toward God.’ That’s always been my hope. Michael has done that. He’s well balanced. He has an intensity to serve. He’s prayerful, spiritual, but he’s also zany and has a joy in his heart.”

The Church Made Stonger

The family members, friends and fellow Marians who packed the Shrine for the Ordination Mass have no doubt of Fr. Michael’s unwavering desire to make present the divine reality of God.

“He is definitely called to the priesthood,” said Fr. Michael’s longtime friend Rebecca Urban of Lancaster, Mass. “The world and the Church are fortunate to have him, and the Church just got stronger as a result.”

“My husband and I are so excited that the Blessed Virgin Mary was able to complete what she started,” said Fr. Michael’s mother Linda. “It’s such an exciting day for us, to see his faithfulness to his calling coming to fruition.”

He was the only one standing as he made his priestly promises before God to:

• with the help of the Holy Spirit, discharge without fail the office of the priesthood in the presbyteral rank, as a worthy fellow worker with the Order of Bishops in caring for the Lord’s flock;
• exercise the ministry of the Word worthily and wisely, preaching the Gospel and teaching the Catholic faith;
• celebrate faithfully and reverently, in accord with the Church’s tradition, the mysteries of Christ, especially the sacrifice of the Eucharist and the Sacrament of Reconciliation , for the glory of God and the sanctification of the Christian people;
• implore God’s mercy upon the people entrusted to his care by observing the command to pray without ceasing; and
• be united more closely every day to Christ the High Priest, who offered Himself for us to the Father as a pure sacrifice, and with Him to consecrate himself to God for the salvation of all.

While he made these promises, Fr. Michael’s family was seated behind him — his mother, his father Michael, his sister Heather, his brother Joe, and his in-laws, nephews and nieces.

His friends were behind him, too — friends from coast to coast. And his co-workers, too — the laity and the religious.

“May God who has begun the good work in you bring it to fulfillment,” said Cardinal McCarrick.

The Marians’ newest priest has many people behind him. 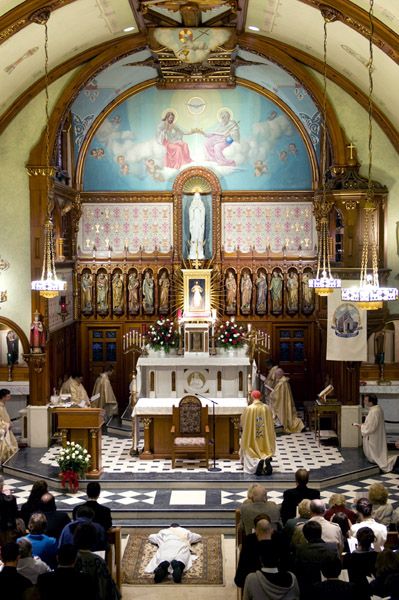 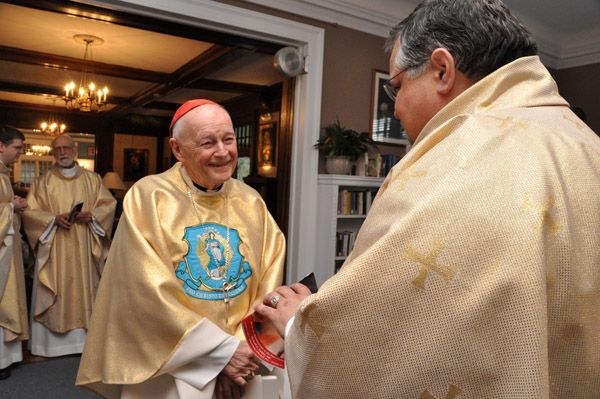 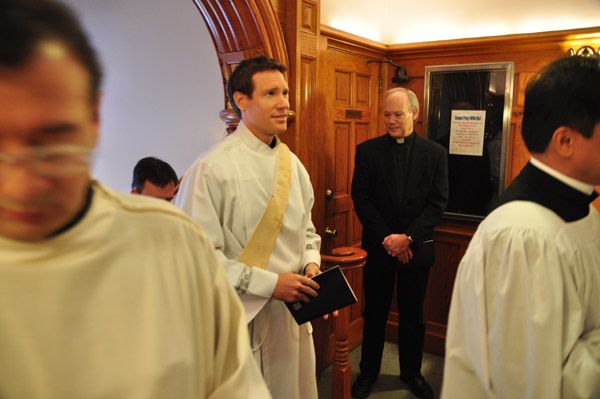 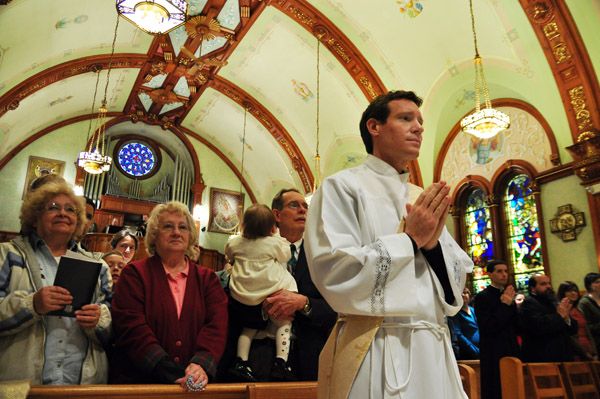 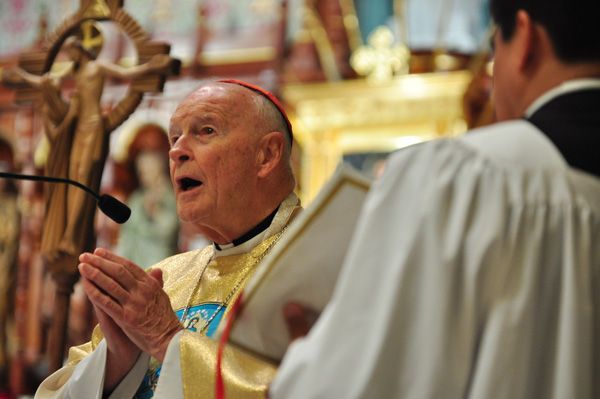 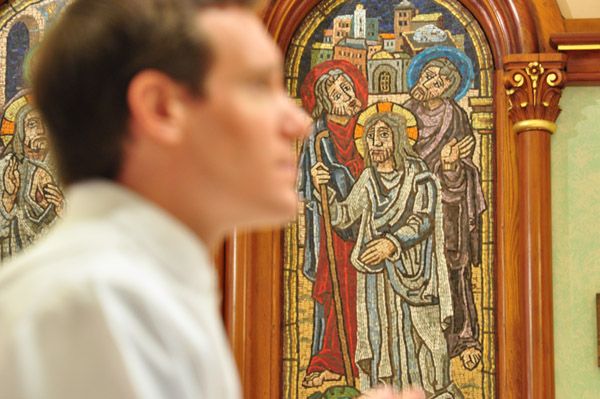 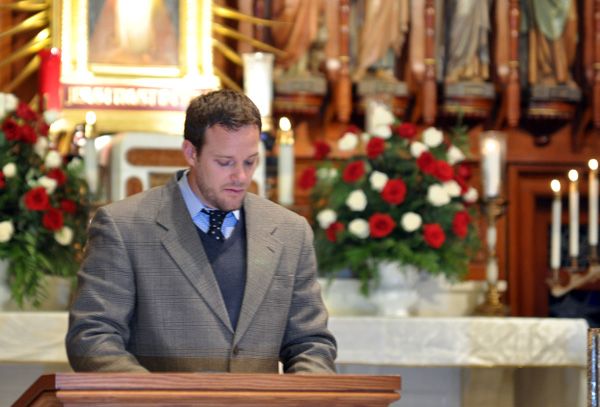 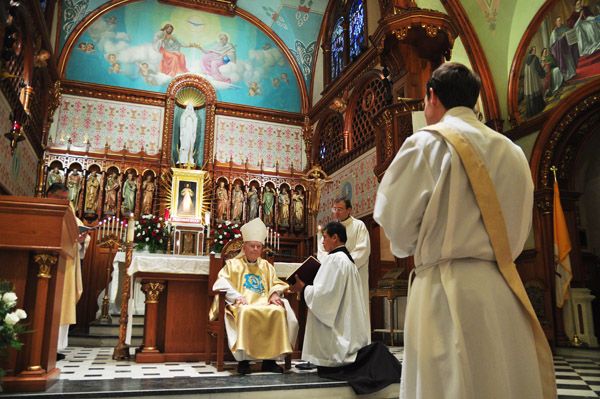 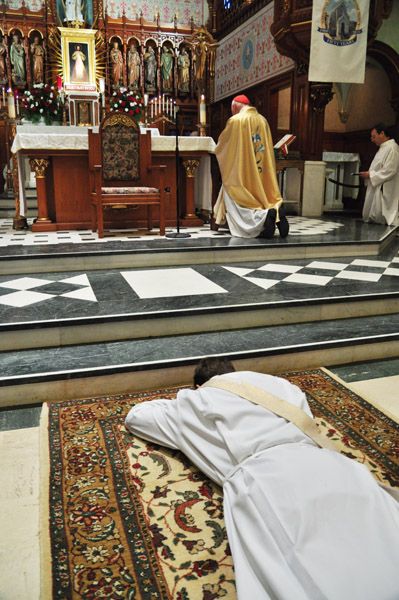 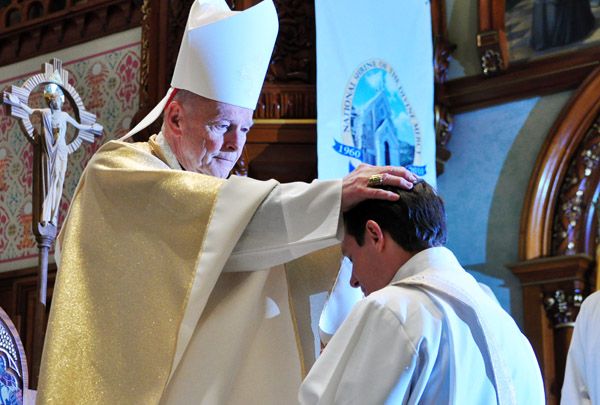 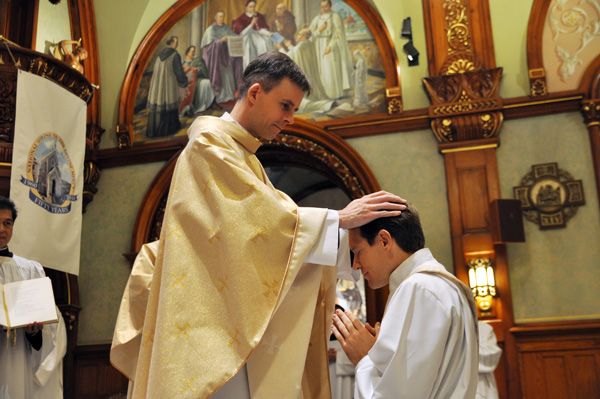 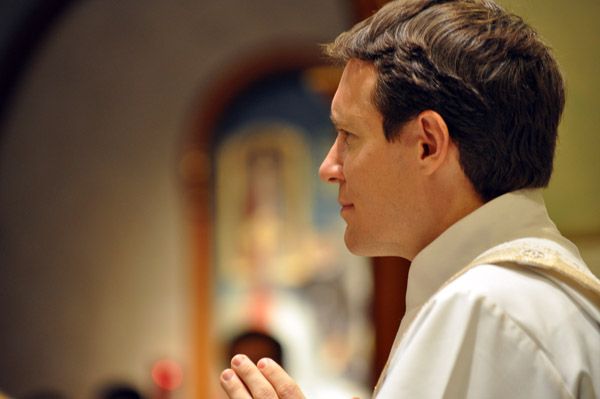 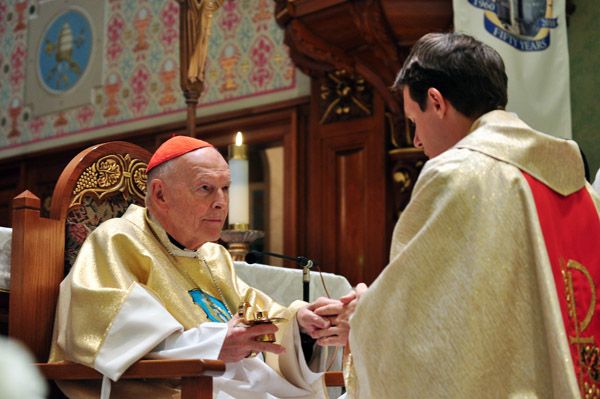 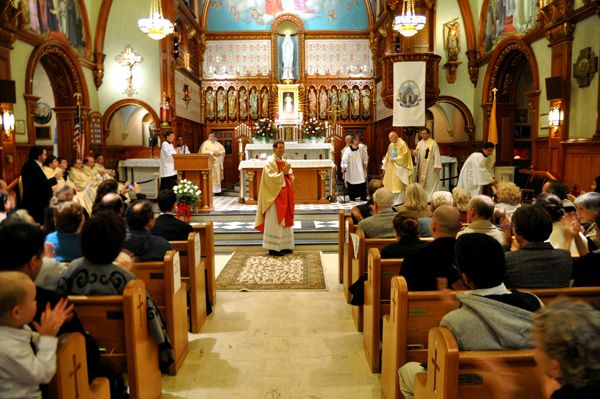 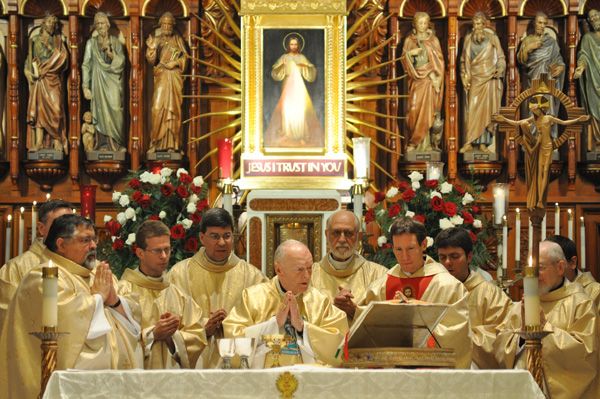 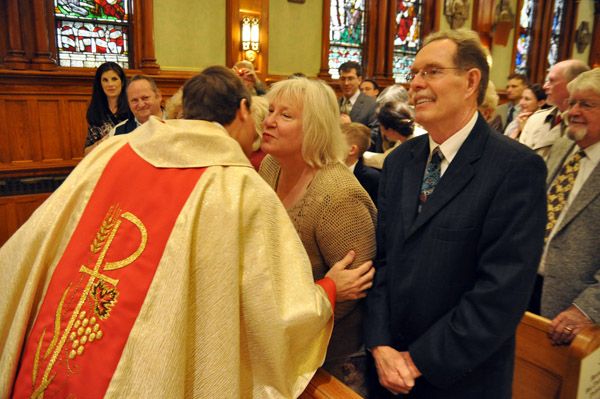 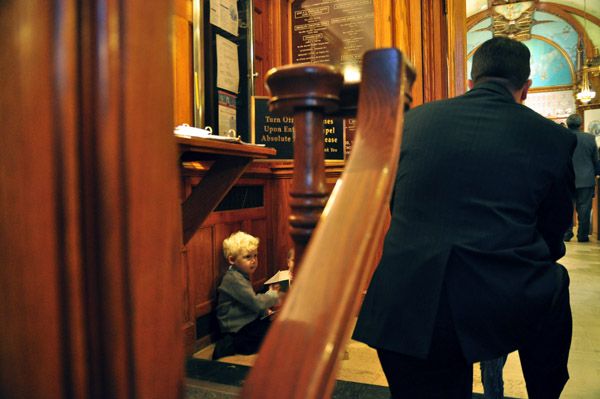 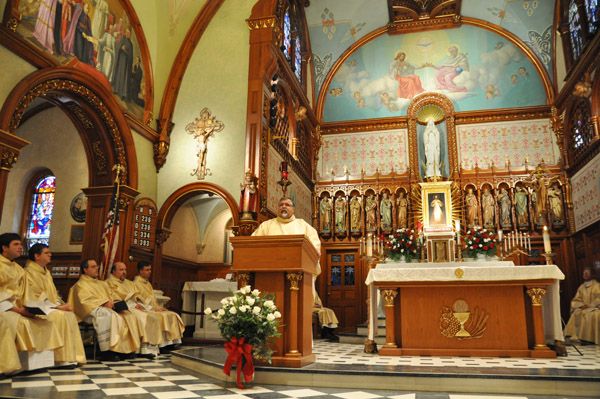 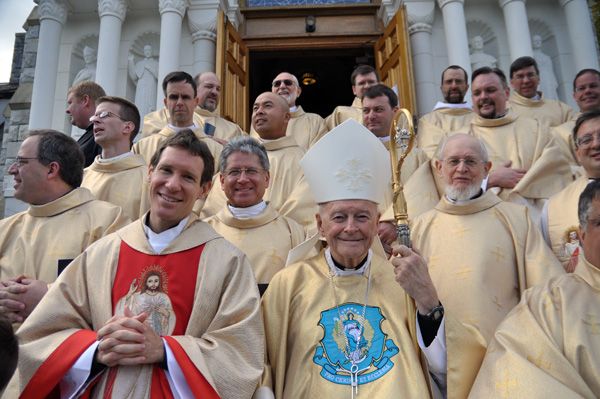 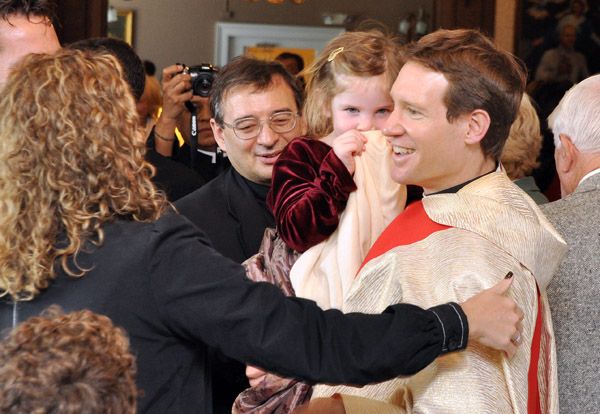 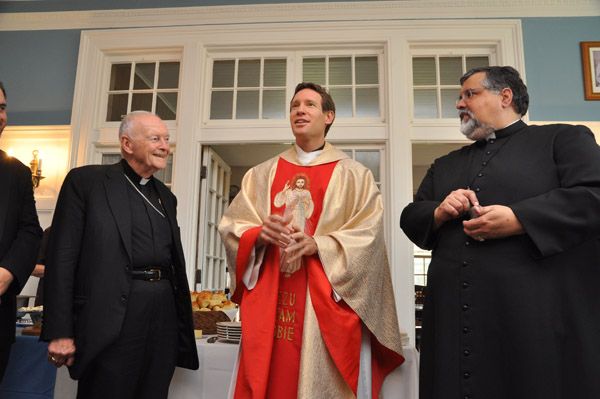 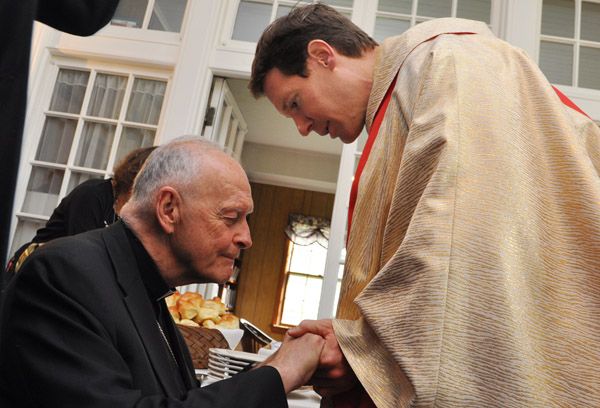 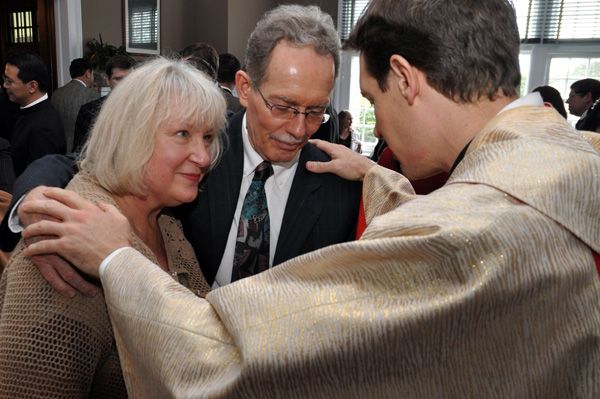 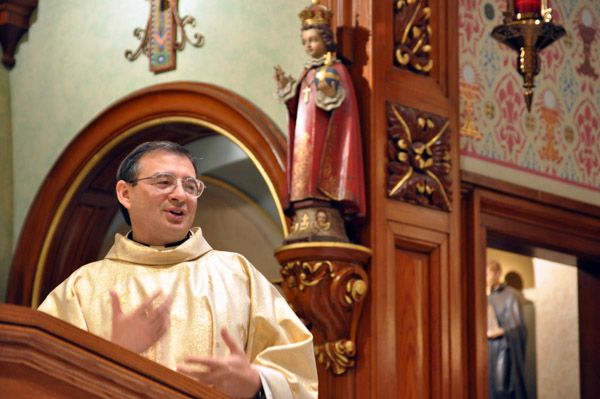 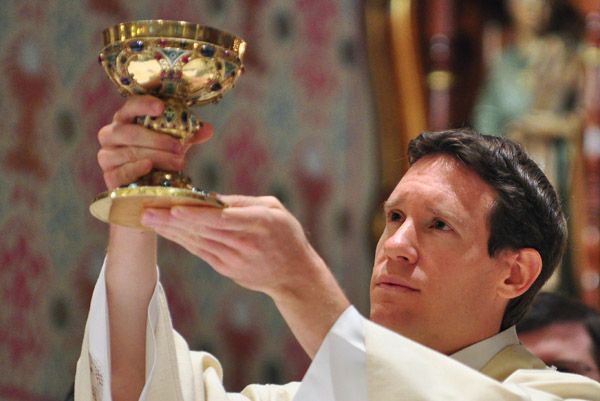 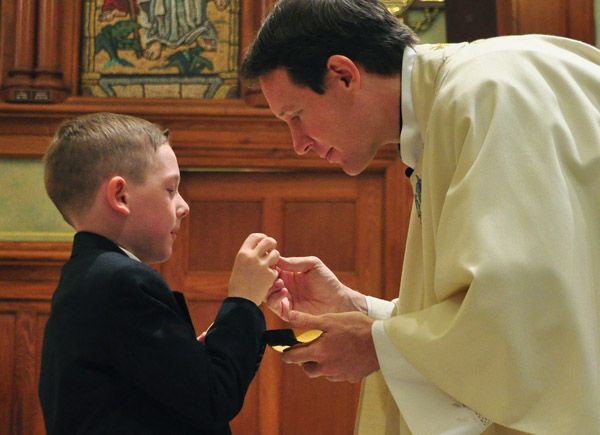 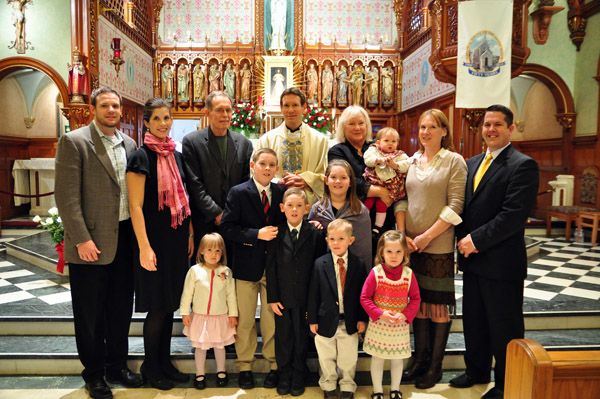 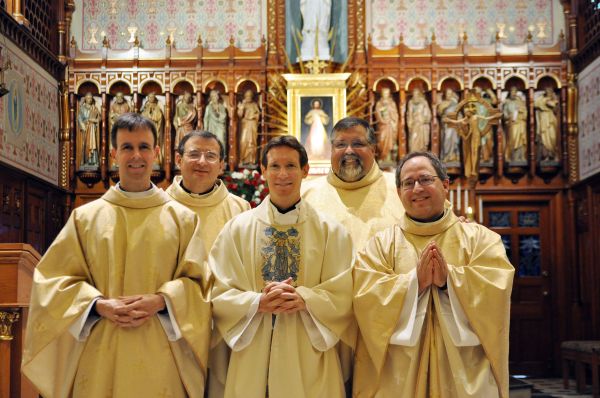