Skip to content
The Senate of the Republic of Poland honored Blessed Fr. Stanislaus Papczyński

The Senate of the Republic of Poland honored Blessed Fr. Stanislaus Papczyński 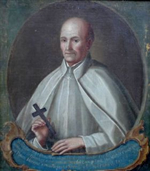 At 10 o’clock in the morning of March 31, 2011, following the motion put in by Mr. Stanisław Kogut, Senator from the Nowy Sącz region, the Senate passed a resolution that pays tribute to the person and achievements of Fr. Papczyński. The resolution, signed by the Polish Senate Speaker, Mr. Bogdan Borusewicz, was received by the representatives of the Government of Polish Province of the Congregation of Marian Fathers.

Full text of the resolution follows:

RESOLUTION OF THE SENATE OF THE REPUBLIC OF POLAND
of March 31, 2011,
commemorating the person and achievements of
the Blessed Father Stanislaus Papczyński

The Senate of the Republic of Poland pays tribute to the Blessed Fr. Stanislaus Papczyński – an outstanding clergyman, theologian, co-creator of the Polish school of spirituality, patriot, preacher and founder of the Congregation of Marian Fathers – the first Polish male religious order.

Father Stanislaus Papczyński was born on May 18, 1631, in Podegrodzie, in the Sącz Dale. He studied at the Jesuit and Piarist Colleges. Having completed his education, he joined the Piarists because of the Marian character of this congregation. In 1661, he was ordained to the priesthood. He worked as an educator and was a valued preacher and teacher of rhetoric. In the 1670s, in Puszcza Korabieska (afterwards called Puszcza Mariańska) he began the founding of a new apostolate. Feeling particularly united with the Immaculate Mary since his very childhood, he created the Marian Order called to fulfill three goals, especially important in his time: spreading devotion to the Immaculate Conception of the Most Blessed Virgin Mary, praying for the departed, and assisting pastors in their ministry and teachings of the truths of faith to the simple folk. That was a time in which the Republic of Poland was at war with Swedes, Transylvania, Cossacks, Muscovites, and Turks, a time of the Swedish invasion, the defense of the Jasna Góra Monastery, and the Lviv vows of King Jan Kasimierz.

We owe to Fr. Stanislaus Papczyński many of the still timely assessments, opinions, and indications. He wrote that “a man without love is like a shadow without sun, a body without soul; he is simply nothing (…) the love is the soul, light, and life of the religious orders as well as of every human community.” Among other things, he also taught that “there is nothing more magnificent under the sun, nobler, nothing over the Polish freedom;” “For your enemies, O Republic of Poland – the most magnificent among the most magnificent countries – do not forget that your position, integrity, and altogether deliverance rest on the shoulders of the brave defenders of your freedom;” “Those who gave their lives in delivering their homeland (…) earn themselves a right to monuments of eternal remembrance; theirs is also the everlasting crown of glory;” “The most commendable act of a noble-minded is dedicating to public matters their property and life;” “All who dream of ascertaining eternity for themselves ought to take into their hearts this profound and noble thought that the Republic of Poland must be understood as something worthy of total commitment and dedication;” “we have been born not for ourselves but for our homeland. No one is a true citizen who lives exclusively for himself, although it is difficult to say about someone that he lives for himself if he does not live for anyone else;” “We need true men not some squanderers, some social dregs. Give true Poles not lackeys to our homeland, give us strong people, brave and able to do great deeds, geared up for battle and ready to take part in counsels.”

In Fr. Papczyński’s writings, one can find many more strong and meaningful passages speaking of his love for Poland and the role and task assigned to its citizens.

Father Stanislaus Papczyński died on September 17, 1701. He dedicated his life to the founding of the Marian Order, service to the Church and homeland, and especially to the poor. The merit of his achievements for the Church and his country was so great that on December 20, 1764, the Coronation Diet of King Stanislaus August Poniatowski petitioned the Apostolic See to elevate him to the glory of the altars. In the course of the three hundred years since his death Fr. Papczyński has become for many a moral, religious, and patriotic authority.

The beatification of Fr. Papczyński took place on September 16, 2007, at the Shrine of Our Lady of Licheń.

The Senate of the Republic of Poland recognizes Blessed Fr. Stanislaus Papczyński as worthy of imitation, an example of a Polish citizen dedicated to the matters of his homeland. The timeliness of his moral and civic teachings gives grounds for bringing his person closer to the modern generation of the Polish people, especially to the youth. The Senate calls educational institutions to popularize the Blessed’s person and achievements.

The resolution is to be published in the daily official “Monitor Polski”.