On Feb. 17-18, 2012, the Marian Fathers and parishioners celebrated the 69th anniversary of the death of two Marian priests — Frs. George Kaszyra and Anthony Leszczewicz — who perished in the flames of fire along with their parishioners during the pacification action conducted in the Belarusian village of Rosica. Both priests refused to abandon their faithful and stayed with them until the end.

The solemn remembrance is held annually at the Rosica church in honor of the two Blessed Marian priests’ birth to the heaven. Below is the report on this year’s solemnity (source: Catholic.by)

“We are gathered here in the Rosica church to praise God and to ask the intercession of Blessed George and Blessed Anthony in our daily life. In those days we seek God’s grace, the grace that was born here out the suffering and faith of the dying.”

With these words, Fr. Czaslau Kureczka, MIC, the pastor of the Rosica parish addressed the numerous gathering of pilgrims, priests, and religious sisters – all those who came to Rosica on Feb. 18 to honor the death of the Blessed Martyrs – Marian Fathers Anthony Leszczewicz and George Kaszyra. The event is held annually.

This year, pilgrims came to Rosica from Płock, Nowopłock, Vitebsk, Brasław, Miory, Dzisna, Głębokie, Luczaj, Rasony, Bigosów, Druya, Vierchniedvinsk, Szarkowszyna, Pelikany, Minsk, Borysau, Zhodzino, and Pińsk. Along with the pilgrims, the Marian Fathers attended, led by Fr. Provincial Paweł Naumowicz, MIC, the head of the Polish Province; the Apostolic Visitator for the Greek-Catholics in Belarus Archimandrite Sergiusz Gajek, MIC; diocesan clergy; and Sisters from the Congregation of the Resurrection of the Lord. There were also Sisters–Handmaids of Jesus in the Eucharist who, as Fr. Kureczka emphasized, “back in the day served the people in this shrine until the end.” They came to complete their seven-day retreat and to renew their faith and love for God and man.

January marked the centennial jubilee of the church in Rosica. This event will be solemnly celebrated during the summer festivities, but Fr. Czaslau already talked about it: “We give thanks to God for this church, where love conquered death, where a particular spirit of prayer is alive, and where our Blessed Martyrs pray together with us, their people, and for us. In these days, Rosica speaks to us in a special way.”

The solemnity opened with the Adoration of the Most Blessed Sacrament. In his remarks, Fr. Czaslau followed tradition by quoting excerpts from many letters that arrive in Rosica from the faithful all over Belarus. In these letters, pilgrims share their experience from visiting this holy Belarusian site and explain the impact made by the Rosica Martyrs on their own lives. It is worthy noting that there usually are long lines of people wanting to benefit from the sacrament of penance. Many pilgrims leave their intentions there, for which the Marian Fathers pray through the intercession of the Blessed Martyrs.

The Vicar General of the Diocese of Vitebsk, Msgr. Franciszek Kisiel, was main celebrant at Holy Mass. The celebration was enhanced by singing of the choir from Barysau directed by Fr. Viachiaslau Pialinak, MIC. This choir comes to Rosica every year.

In his sermon, Fr. Paweł Naumowicz, MIC, referred to the flames depicted on the image of the Blessed Martyrs, emphasizing that “the first meaning of that fire is suffering, persecution, injustice.”

“These flames of suffering contain the light of God. Our Blessed Martyrs remained together with their parishioners to bring them love, because they carried within themselves another flame – the flame of God’s love that gives birth to the flame of love for others. This flame of love made it possible for the Rosica Martyrs to enter into the flame of suffering. Our two Martyrs showed us a certain kind of suffering – the suffering that comes at a given moment,” said the Provincial.

Father Pawel also mentioned the suffering that exists in our daily life. As an example, he recalled Blessed George Matulewicz, the Renovator of the Congregation of Marian Fathers, whose 25th anniversary of beatification is celebrated this year.

What prompts the pilgrims to come to Rosica on those cold days, dedicating their free time and resources? What prompts them to freeze in the chilly church and to go in procession to the site of martyrdom? Father Cziaslau Kureczka often mentions this Rosica phenomenon. He said that a man was surprised to find out that pilgrims keep coming to Rosica, whether it’s 30°C below or above freezing. Learning about it, this man said: “Indeed, God and His grace are at work here.”

Truly, this phenomenon cannot be explained rationally. One recalls the story told by a seminarian about some foreign guests visiting Rosica on the August solemnity. These people saw with amazement the bloody footprints left behind by a pilgrim who arrived in Rosica by foot, having traveled 300 kilometers. “Why did he do it?” asked the foreigners. “After all, we live in the 21st century.” But they understood the reason when they came to the site of the Blessed Martyrs’ death.

“I find peace and joy, having had a good cry here. It is here that I draw strength. It feels as if you get a drink of cold water on a hot day,” said a woman-pilgrim from Głębokie.

A traditional crucifix that leads the procession of the faithful to the place of the Blessed Martyrs and their parishioners’ death is carried by Konstanty from Zhodino. This crucifix is heavy, but a cross is never light. The people walking in this procession are always silent and focused. Certainly, many of us, following this road, recall these bygone events and these people.

At the closing, Fr. Czaslau encouraged pilgrims to write, to revisit this place, and to leave their prayerful requests there. And naturally, many a pilgrim would come back to Rosica, to the place where love conquered death. 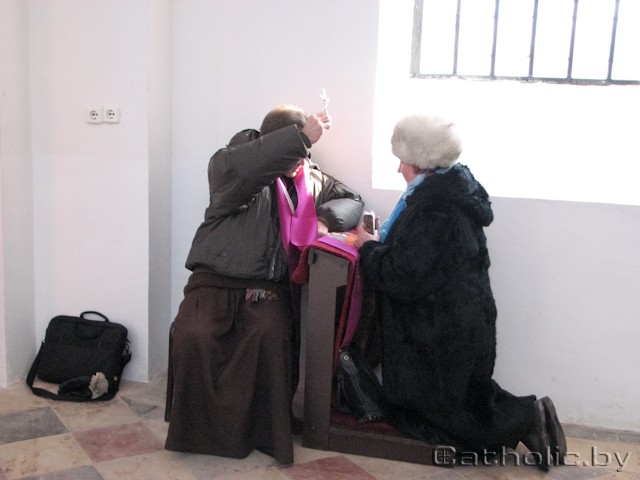 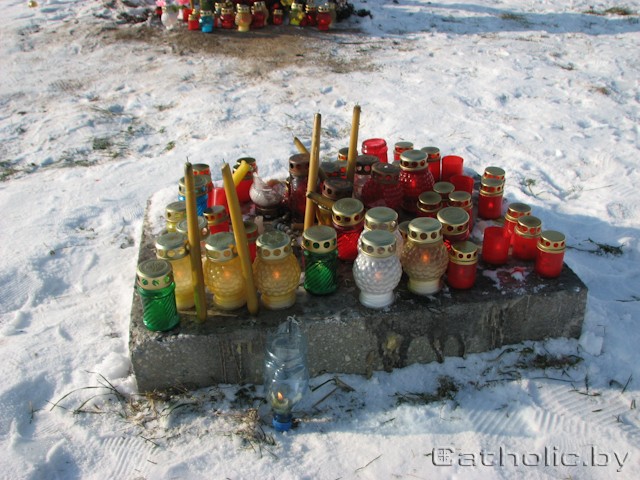 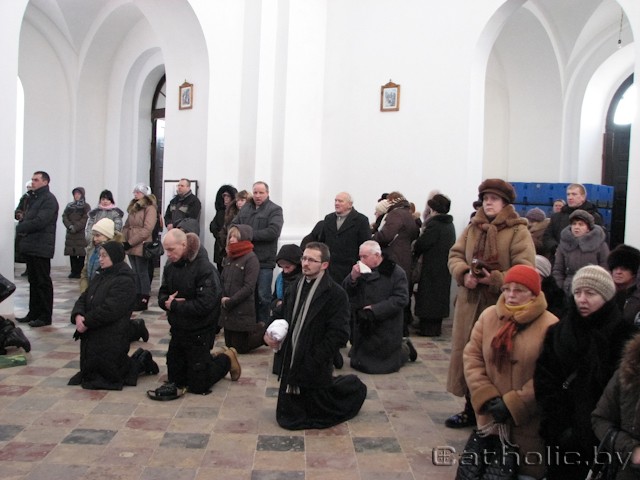 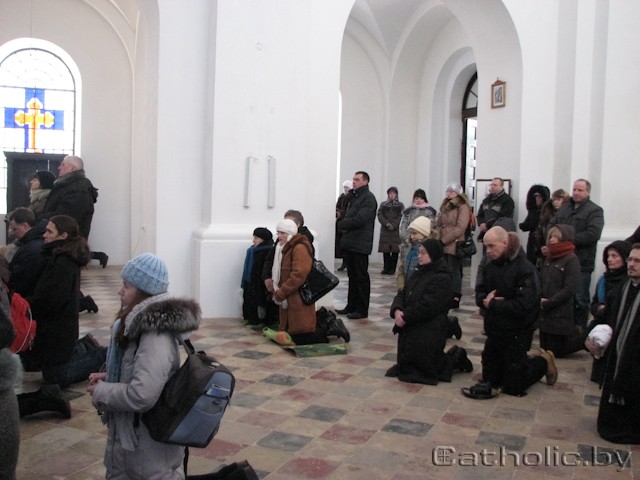 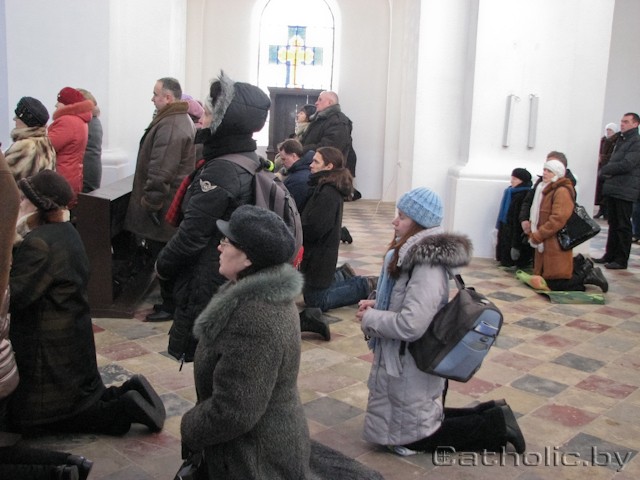 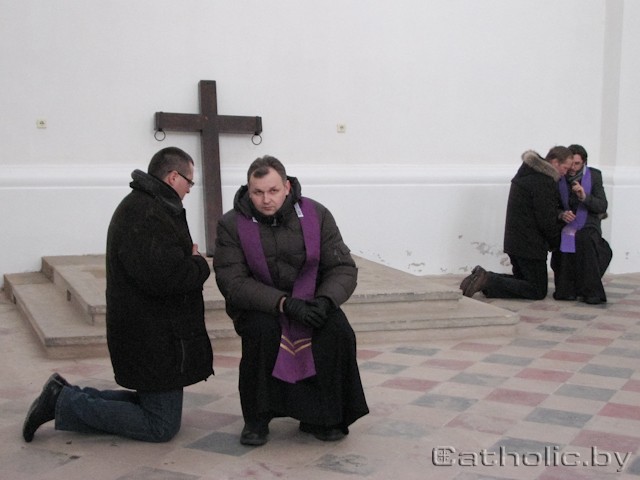 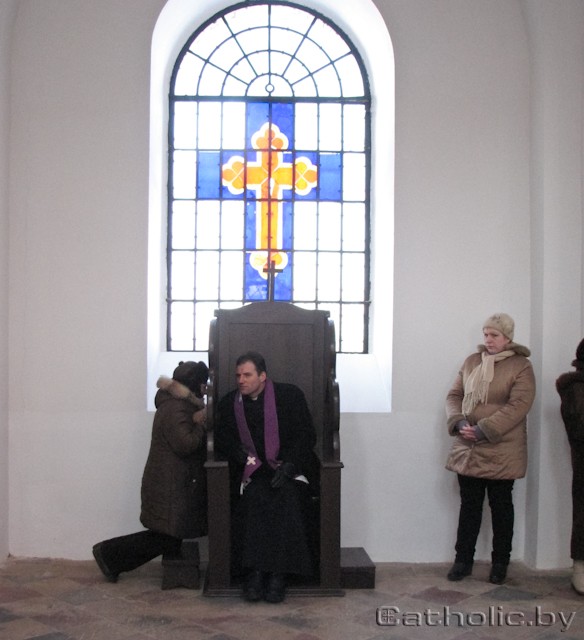 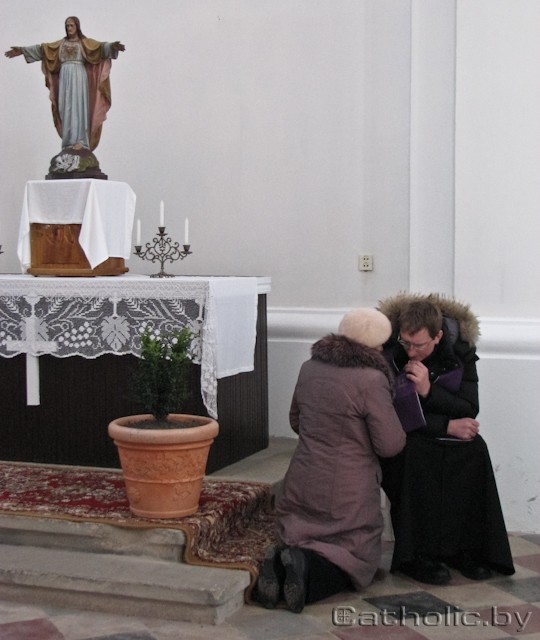 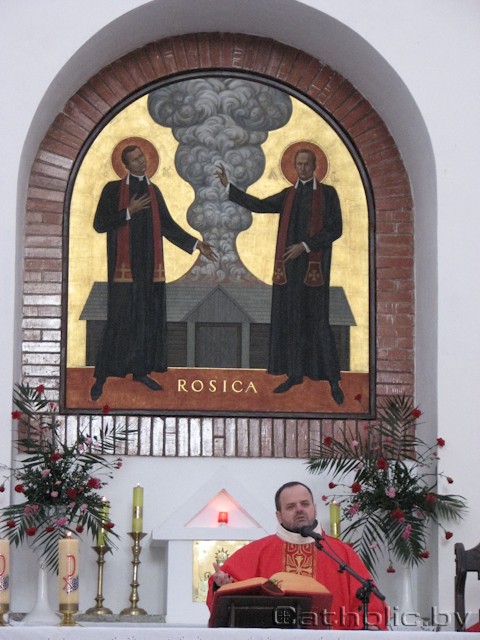 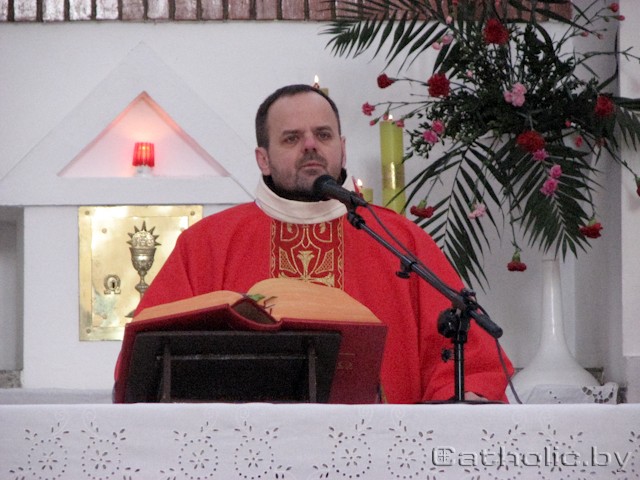 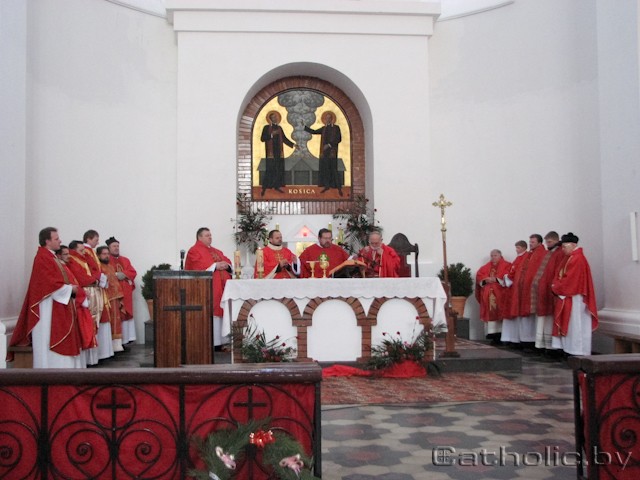 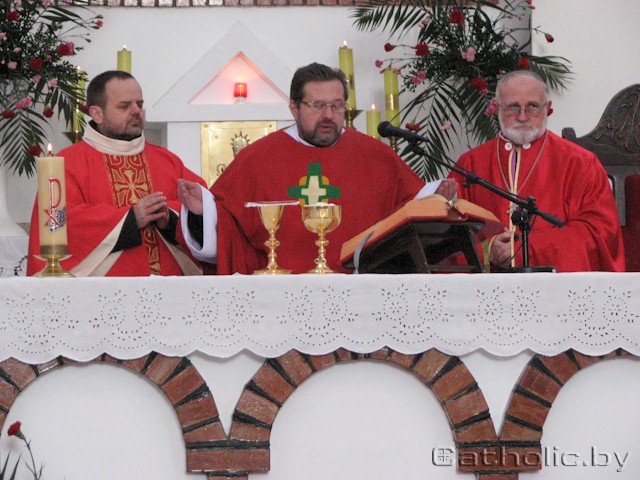 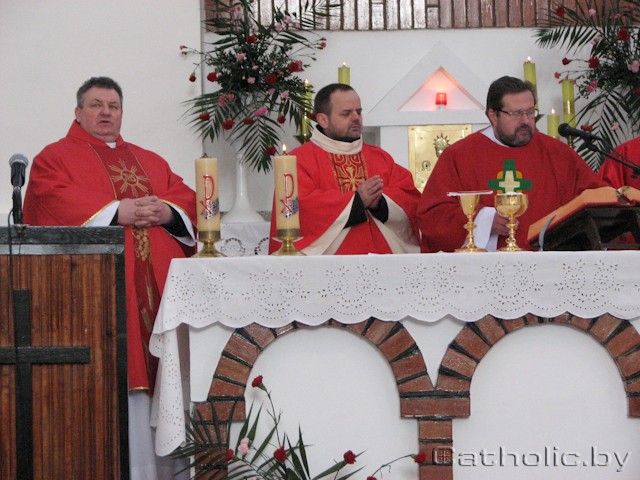 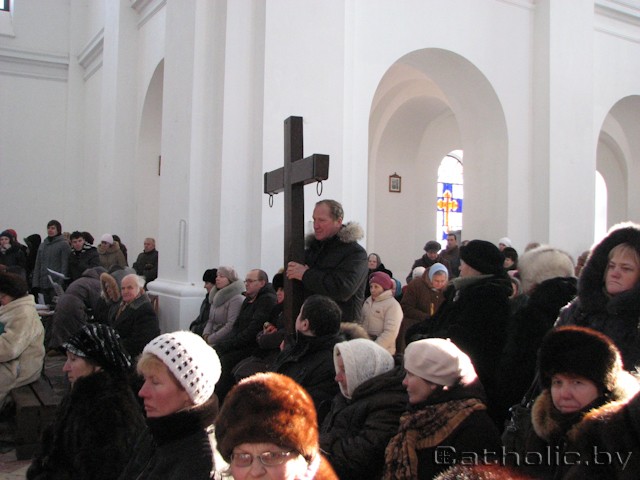 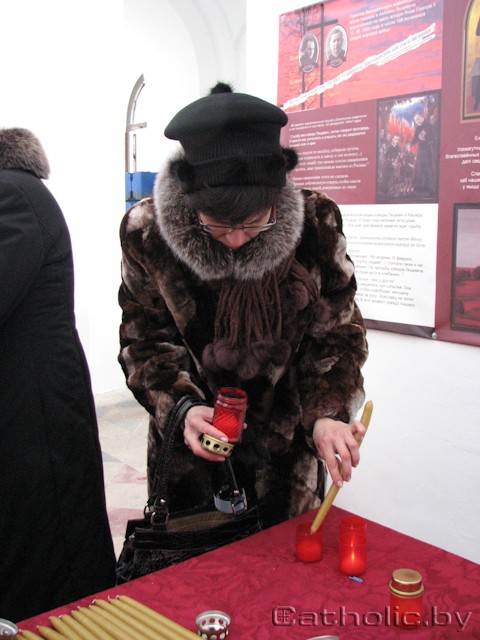 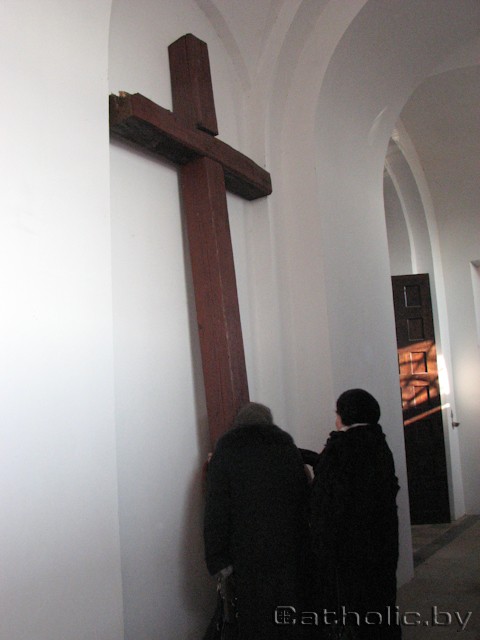 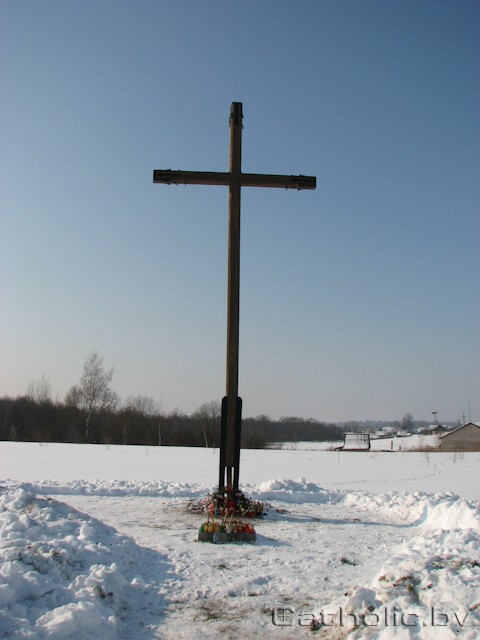 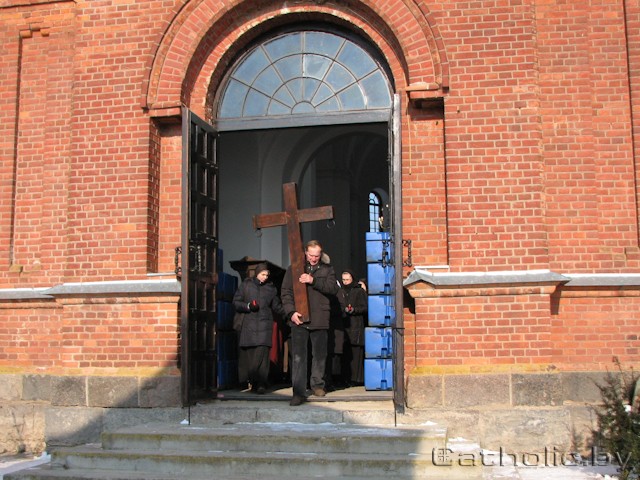 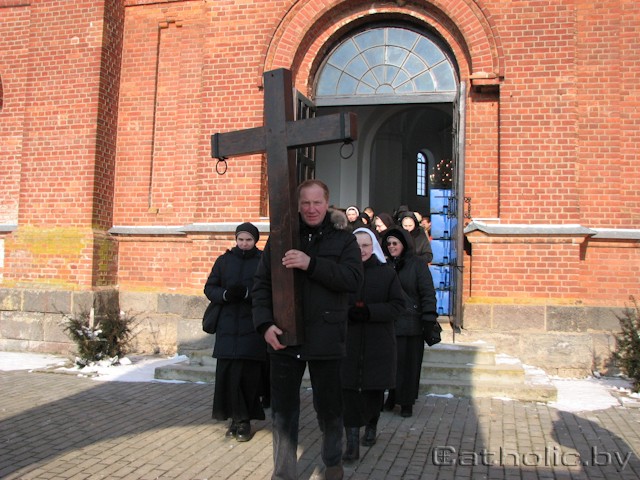 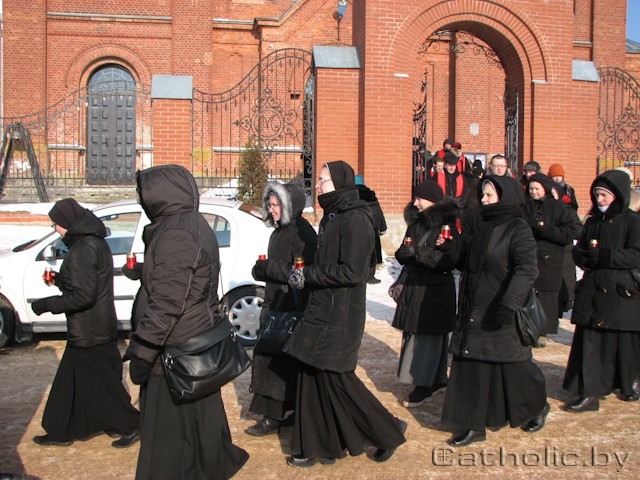 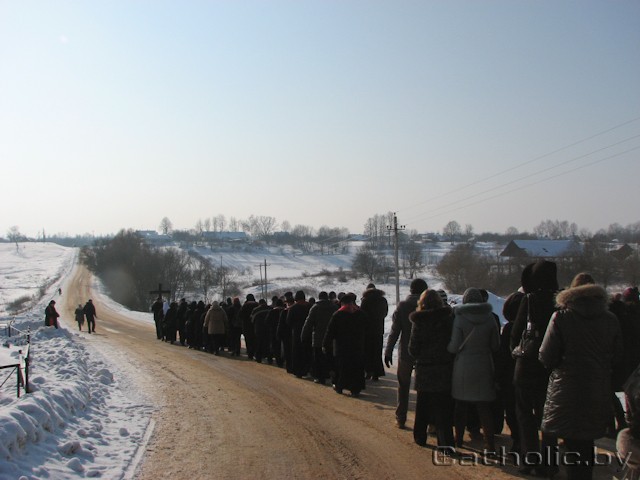 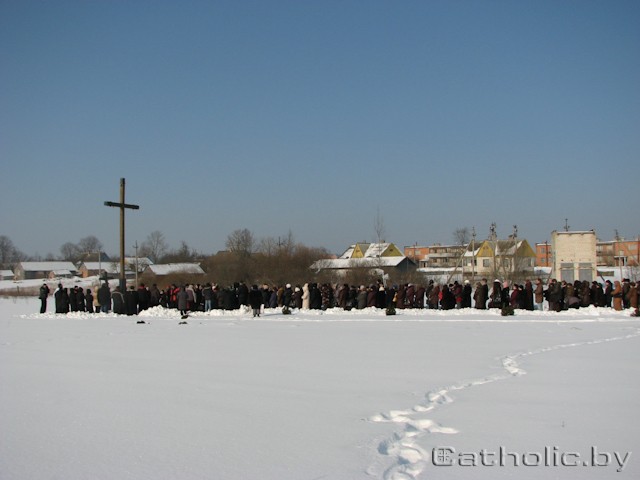 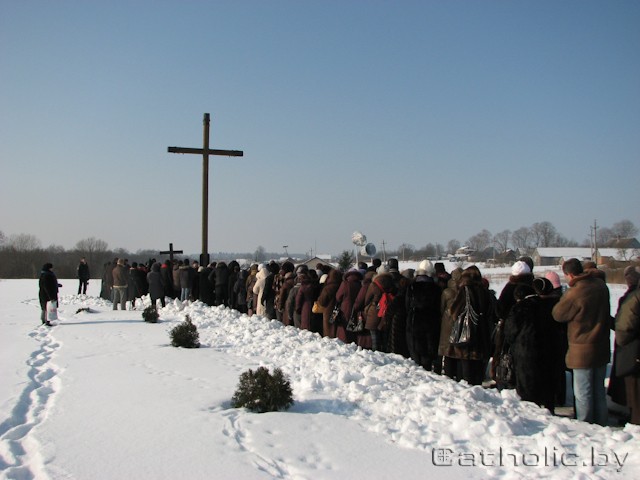 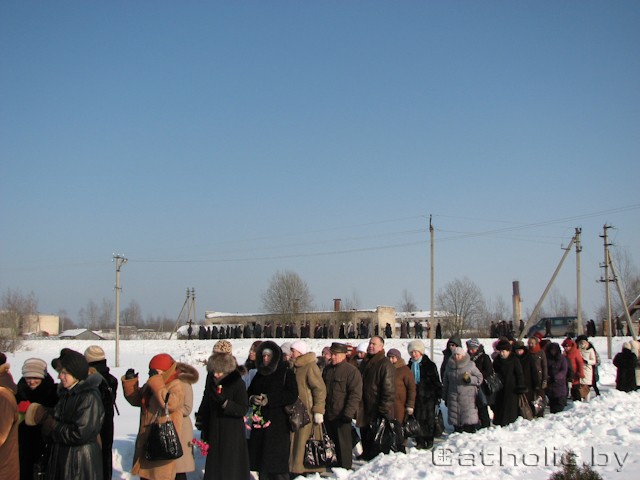 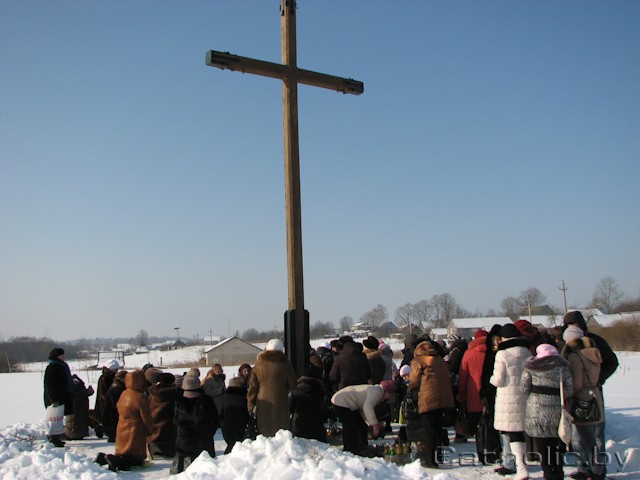 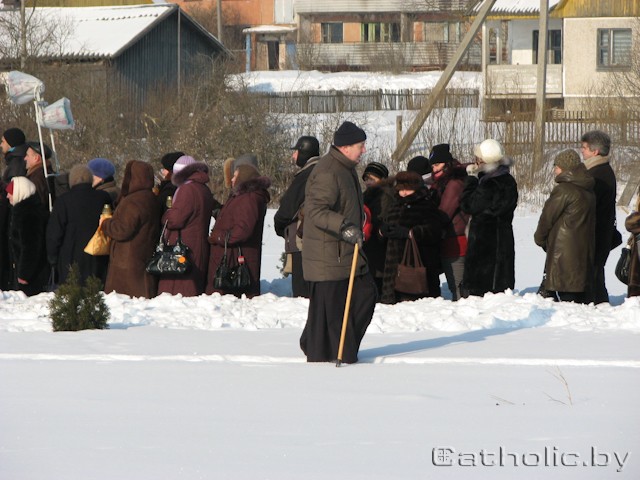 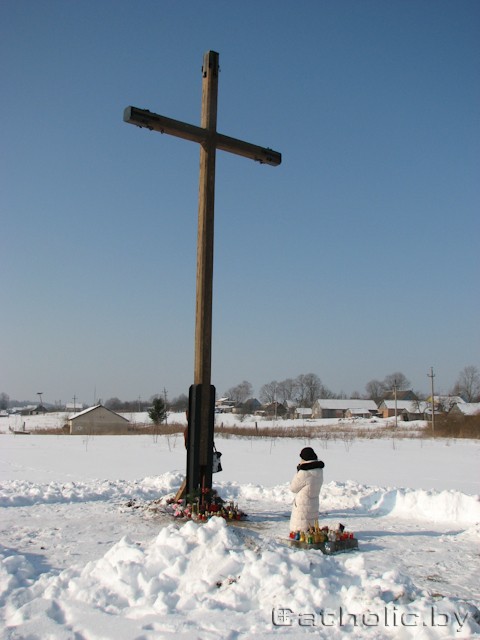