The Marian Fathers said goodbye to one of their dear — and legendary — brothers in a Liturgy of Christian Burial for three-time provincial superior of the former St. Casimir Province in Chicago, Fr. Victor Rimselis, MIC.

About 30 of his Marian brothers gathered at the National Shrine of The Divine Mercy in Stockbridge, Mass., to celebrate Fr. Victor’s life — and his new life in Christ. It was a warm and touching tribute to what Fr. Tim Roth, MIC, called “a kind, gentle, and deeply caring man” who affected for the good several generations of Marian priests and brothers. 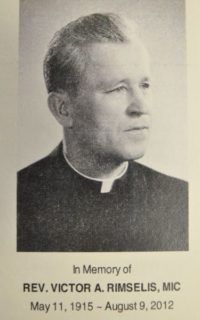 ‘A Steady Hand’ at the Marian Helm
Father Victor, born on May 11, 1915, died on Aug. 9, 2012. For three separate six-year stints, he served the Marian Congregation as head of the Chicago province. That province has since been combined with the former St. Stanislaus Kostka Province based in Stockbridge, now the Blessed Virgin Mary, Mother of Mercy Province, which includes Marians in the United States and Argentina. Father Victor also served a term as vicar general of the Marian Fathers.

Father Victor joined the Marians on Sept. 29, 1933, at the age of 18. He made his perpetual vows on Aug. 15, 1930, and on May 2, 1943, he was ordained a priest. For two generations of Marian postulants, novices, seminarians, brothers, and priests, Fr. Victor provided what Fr. Kazimierz Chwalek, MIC, called “a steady hand in bringing the Catholic faith to many people and by example leading his Marian brothers on the road to holiness. God gave him a long life, and [Fr. Victor] spent that life for Christ and His Church.”

‘A Wise and Learned Man’
Father Joe Roesch, MIC, vicar general, said Fr. Victor had a great impact on the Congregation through his prolific

writings, his teaching, and his counsel: “He was a wise and learned man, very much an intellectual but one who had that rare quality of also being kind, unassuming, and gentle.”

Father Bill Hayward, MIC, said Fr. Victor “accepted my first vows, my perpetual vows, and he [called me to] my ordination as a priest. He loved physics and philosophy, and yet he was so gentle. We as young Marians were happy to have him as our leader.”

Father Bill mentioned that Fr. Victor’s background growing up in Lithuania gave the young Marians “a different and valuable perspective on what it’s like to be displaced, to lose your homeland, and to always appreciate the little comforts that we have.” Father Victor was also fluent in six languages, and Fr. Bill recalls days years ago when Fr. Victor would hear confessions for six hours at a time during Lent: “He would hear confessions in all these different languages, and sometimes, by the end, he would lose track and speak Polish to a German person or English to an Italian. We would have a laugh over that.”

A Man who Knew ‘the Big Picture’
In his homily, Fr. Dan Cambra, MIC, said that “almost every significant day of my life as a Marian priest, Fr. Victor was there. At my ordination Mass, he was sitting there in his gentle way, off to the side, crying through the whole Mass. When I was installed for the first time as a pastor, Fr. Victor was there. Again, he cried through the whole thing.”

One of Fr. Victor’s greats abilities, said Fr. Dan, was the way he could keep “the Big Picture” always in the forefront, “and the Big Picture, as we are reminded here today, is the most central event in human history, which is Jesus Christ come among us; Jesus Christ, for whom we live; Jesus Christ, for whom we die. It is Christ who remains the Central Point of our philosophy, a reality that Fr. Victor could talk about for hours.”

Father Dan then repeated what many said, referring to Fr. Victor’s possession of “a great intellect” tempered with “a kind, gentle spirit.” Of the countless hours he spent with Fr. Victor, Fr. Dan said “there were holy and sublime times, and there were down-to-earth times,” but for Marians — be they novices, seminarians, brothers, or priests — he would always have time, good advice, and the right words.

“We come here before our heavenly Father,” Fr. Dan concluded, “not as we are [in sin] but washed in the blood of the lamb. We bring with us the good we have done, but more importantly, we bring our shortcomings — with the knowledge that all is forgotten, all is forgiven.”

Following Mass, Fr. Victor was buried at the Marian cemetery on Eden Hill.