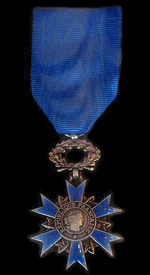 One of the highest national decorations of France – the National Order of Merit – was presented to Fr. Adam Boniecki, MIC.

Father Adam Boniecki, the editor-in-chief of “Tygodnik Powszechny” for many years and, according to the French Ambassador, “a Francophile known for his longtime dedication to the Polish-French dialogue,” became the Commander of the National Order of Merit. The ambassador added that in 1999, as the editor-in-chief of “Tygodnik Powszechny,” Fr. Boniecki contributed to the newspaper becoming “an open and critical forum of the Catholic intellectuals, a group whose activities prompt the Polish public to discuss such topics as the role of the Church in the new Poland or the evolution of the concept of a nation in the united Europe.”

“Your personality, high moral authority, openness, and tolerance, your stance in defending freedom of speech and democracy – these are the values, also dear to France, which made you a prominent figure in the 21st-century Polish Church,” said Mr. Buhler.

“Thank you very much for this decoration. I am deeply moved,” said Fr. Boniecki in his brief speech. “Why does one feel so moved because of a decoration? I have to go back 30 years to the time when I worked at the Vatican, editing the Polish version of “L’Osservatore Romano,” the only foreign-published newsletter admitted to Poland. Our government took a great interest in this work (…). What manpower, what effort has been put into spying on me, tarnishing me and having expelled from the Vatican! At that time, 30 years ago, the French president awarded me the same decoration, only of a lower rank,” recalled Fr. Boniecki.

The National Order of Merit was also presented to Fr. Jozef Maya, pastor of the St. Catherine Parish in Służewiec and chaplain of the Independent Students’ Association (NZS) created in 1980 out of students’ organizations opposing the Communist dictatorship. The writer Marek Ostrowski received the Legion of Honor, while Barbara Podmiotko, a journalist, was awarded Order of Arts and Literature.