Sunday, Oct. 7, 2012, during the solemn Eucharist at the Marian Church of the Immaculate Conception of the Most Blessed Virgin Mary in Lublin two Brothers – Kanstantsin Anashka and Vadzim Mizer – made their profession of perpetual vows of chastity, poverty, and obedience before the Superior of the Polish Province, Fr. Paweł Naumowicz, MIC. Both newly professed come from Belarus and are now in their sixth year at the Marian Seminary.

Many Marian confreres, especially those from Belarus, as well as Lithuania and Ukraine, were in attendance.

In his homily, the Provincial pointed out the fact that religious consecration is deeply immersed in the sacrament of baptism. Although the reading selected by the Church for that Sunday spoke mainly about marriage, yet the words, “What God has joined together, let no human being must separate” perfectly echo the act of making a perpetual profession.

For the Marian seminaries this day had a double meaning for it marked also the beginning of the new academic year. 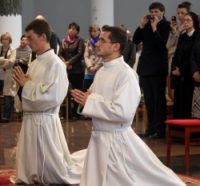