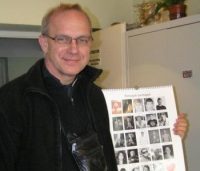 Father Andrew Dziedziul, a Marian, became one of the winners of the 12th annual Totus Award. Prizes are awarded on the eve of the Pope Day by the Work of the New Millennium Foundation. The ceremony was held on Oct. 13, 2012, at the Royal Castle in Warsaw. There are four categories for Totus Awards and their winners may be both individuals and institutions whose work contributed in an outstanding manner to promoting the values of human being.

Father Andrew Dziedziul, MIC, received his award in the category of “Promotion of the human being, charity, and educational work.” The Totus Award’s Chapter thus provided the following reason for choosing him as the Award recipient: “For the years-long work of actively fulfilling the teaching of Pope John Paul II through a merciful, Samaritan service to others.”

Since 1998, Fr. Dziedzul manages the Home Hospice in Warsaw, which cares monthly for about 300 patients and their families. As a priest, he provides spiritual help for the dying and bereaved families. For many years, he has been organizing free of charge courses for hospice volunteers, students, doctors, nurses, psychologists, and hospice chaplains. He also organizes summer and winter camps for orphans.

Since 2007, upon the request of the Polish Hospices Forum that unites five hospice associations, this Marian fills the duties of a hospice chaplain and pastor for the hospices- members of the Forum. In the Forum structures, he acts as a co-organizer of formative and training workshops for the staff and volunteers of hospice in Lichen. The Forum, which brings together the hospice staff and volunteers from all over Poland, allows focusing not only on medical assistance to the dying, but also helps seeing the whole person in the perspective of eternal life. Father Dziedziul believes that psychological and spiritual pains are often far greater than the physical pain, which can be managed with medications.

The prize-awarding New Millennium Work Foundation was established in 2000 as an institute whose goal it was to commemorate the pontificate of John Paul II by spreading the Pope’s teaching and by supporting certain social initiatives mainly in the field of education and culture.

The Foundation organizes the Pope Day, grants the Totus awards, administrates a scholarship program for the school youth, and also organizes the academic competition for the chance of studying journalism and political studies. Thanks to its fund-raising, as many as 2,500 young people already obtained scholarships and are able to further develop their abilities and interests.