Pope Francis commenced the Jubilee Year of Mercy in Africa a little ahead of time, while he was on an apostolic trip to several African countries. On Nov. 29, 2015, the Pope opened the Holy Door at the Cathedral in Bangui, Central African Republic, and his entire visit became a great sign of mercy and reconciliation between the feuding tribes after their last armed conflict.

Similarly, in our Diocese of Doumé Abong Mbang, which also recently commemorated the end of the Youth Synod and the Diocese’s 60th anniversary, the Year of Mercy and the opening of the Holy Doors at the Doumé cathedral took place on Dec. 6, 2015. The Apostolic Nuncio Piero Pioppo and many bishops from the region attended the ceremony. Our Divine Mercy Shrine in Atok was chosen as a place of pilgrimage for the Year of Mercy. Bishop Jan Ozga, the Ordinary of our diocese, performed the ceremonial dedication of the Mercy Gate at the shrine on Dec. 7, 2015.
,br> The Divine Mercy Shrine has existed since April 18, 2004, but Polish missionaries brought the Divine Mercy devotion to the diocese much earlier. In Atok, the Marians started to spread the Divine Mercy message after they took over the parish in 2002. We developed a tradition of pastoral visits to all of the villages in the parish, during which we taught the Divine Mercy message and the recitation of the Divine Mercy chaplet. Developing the Divine Mercy Apostolate, we visited all the 22 parishes in the diocese with a group of three local assistants. In 2006, on the 50th anniversary of the diocese, all diocesan parishes were entrusted to the Merciful Christ. Thanks to this pastoral action, pilgrims started to come to the shrine, not only on the Feast of Divine Mercy, but also for numerous sessions and retreats. Although pilgrims now come to the shrine, we did not abandon our tradition of visiting the growing Groups of Mercy in villages and parishes. For this reason, every year before the Feast of Mercy, with a group of local assistants I visit the parish, which is the point of the pilgrimage’s departure, and prepare them for the feast. In this Jubilee Year of Mercy, I visited 12 parishes prior to the feast. It was not easy, but it helped the pilgrims and members of the Groups of Mercy to better prepare for Mercy Sunday.

As per our tradition, pilgrims arrive at the shrine from all corners of the world. Some come from the tropical forest; others, from the city or the riverside; they come from the villages in the south and the north, in the east and the west. This year, 539 people from outside our parish arrived by foot, walking for three days; about 400 parishioners joined them. Dozens of people came from other dioceses. Some arrived directly to Mass. The shrine was filled to the brim. People were founding a place for themselves in tents that could accommodate 100 people. We estimate that we had about 2,000 pilgrims in this Jubilee Year.

The walking pilgrims stopped in villages and chapels. They prayed with the local people, who entrusted them with their prayer intentions and fortified them with whatever food they had.

We obtained from the local authorities guarantees of the pilgrims’ safety on the road. The police were watchful for accidents, especially at the entrance to the shrine from the main road. Big trucks carrying loads of cut tropical trees were stopped in order to let the singing pilgrims safely enter the shrine and go through the Gate of Mercy. There, the shrine rector welcomed them. All sang “Misericordes sicut Pater,” the hymn of the Mercy Year, were sprinkled with holy water, and received a blessing.

After the pilgrims were greeted, they went to pick up their luggage, which their priests had brought earlier by car. All went to wash up and find a place to sleep. Our mission’s guest quarters can only accommodate 40 people, yet we had almost a thousand pilgrims walking in this Saturday, so they had a place to sleep in the parish facilities, at private homes, in classrooms, and wherever possible. However, no one complained because the most important thing was to be there, at the Shrine of the Merciful Christ.

The first important event of the feast, which started on Saturday, was the solemn recitation of the Divine Mercy Chaplet, which began at precisely 3 pm with the tolling of the bell, a commentary, and singing. We would usually meditate in the chapel on the sorrowful mysteries of Christ’s Passion and Death, as revealed to St. Faustina. But for the Year of Mercy, we decided to meditate instead on the parables about mercy: the Prodigal Son — or rather the merciful Father (Lk 15:11-32); the faith of the Canaanite woman (Mt 15:21-28); the wicked farmers (Mk 12:1-12); the merciless debtor (Mt 18:23-26), and the Good Samaritan (Lk 10:29-37). During our time of prayer, several people spoke of their faith, repentance, and gratitude to the Merciful Christ for graces they had received.

In the evening, we held Adoration of the Blessed Sacrament and created an opportunity for confession. We held vigil until midnight. Gentle singing of songs about mercy and the Eucharistic alternated with the silence of adoration.

Early in the morning, the Marian and diocesan seminarians together led the praying of Lauds from the Divine Office, our Deacon Emmanuel presiding.

We invited the Apostolic Nuncio to Cameroon and Equatorial Guinea to the Feast. Archbishop Piero Pioppo arrived in a family-like atmosphere with his secretary and all the sisters who work at the nunciature. He was accompanied by the Ordinary of our diocese, Bishop Jan Ozga, and the group of Ouvrieurs Apostoliques (“Apostolic Workers” — the name given to all priests and sisters working at the diocese).

Addressing the pilgrims, the Nuncio emphasized the significance of Christ’s Resurrection and His presence among the apostles gathered in the Upper Room, whom He endowed with peace and the gifts of the Holy Spirit. On that day, we all experienced the same presence of the Risen Lord in the Word, in the Sacraments, in our lives, and in the Church. The archbishop spoke of God’s mercy as of a gift given to sinful and fallen man, to restore his dignity and give his life a new meaning. God is merciful: He looks into the human heart, seeing its weakness, wounds, fear, and anxiety. God wants to dwell in human hearts and bring peace there. The Risen Christ opens His heart to give us forgiveness of sins and the strength to overcome difficulties and evil. The Nuncio also recalled the Holy Father Francis’ words, spoken during this year’s Divine Mercy celebrations in St. Peter’s Square, as he showed the pilgrims the wounded face of Christ. Christ brings new life to us if we are with him. This is how great mercy is. The Risen Christ accepts us as brothers, takes away our sins and weaknesses, and renews us through forgiveness and love that is faithful to the end. We also received the Holy Spirit that Christ breathed on the Apostles.

Therefore, let us be His witnesses and let us show His love and mercy, share the gifts received with our loved ones, and especially with the poor and those in need of support. Let us not close our hearts to Christ, but receive Him, and together let us profess, as did St. Thomas, “My Lord and my God.”

Before the concluding blessing, the Apostolic Nuncio also blessed three images, two for our shrine (one of St. Faustina, the Apostle of Divine Mercy and one of St. Pope John Paul II, the Great Mercy Pope), and one image for our chapel of Bl. Stanislaus Papczyński, whose canonization is to take place on June 5, 2016.

After solemn Mass, which lasted three hours, the faithful venerated the holy relics of St. Faustina and St. John Paul II. The ceremony concluded to the singing of a song about St. Faustina.

The group of Apostolic Ladies served lunch for more than 200 priests, sisters, and select pilgrims in the parish hall. After lunch, the Apostolic Nuncio visited the shrine grounds and viewed the Way of the Cross, the Way of Lights, and the Way of the Rosary that are under construction. He saw also fields of palms, coffee, cacao, pineapples, and bananas.

Some of the pilgrims went back home at once, but those remaining went to the Hour of Mercy, also called the Hour of Golgotha. After a brief meditation, we recited the Divine Mercy Chaplet and received Bishop Jan Ozga’s blessing. 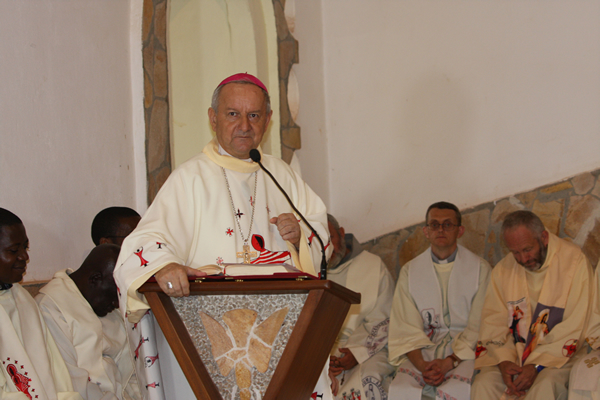 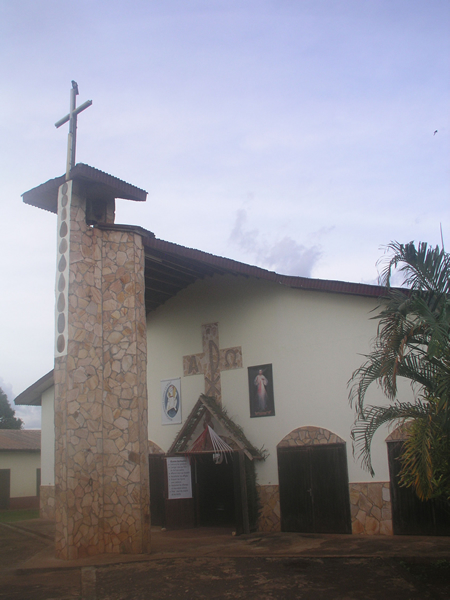 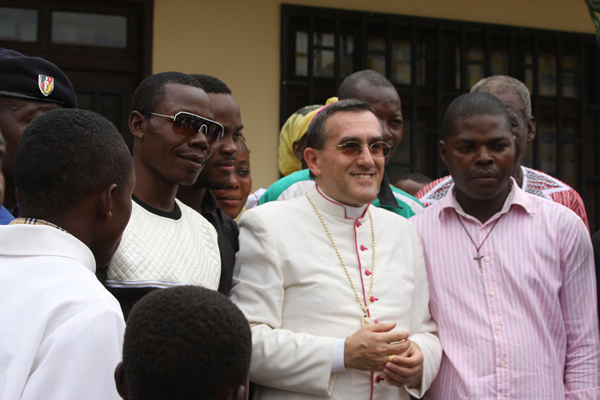 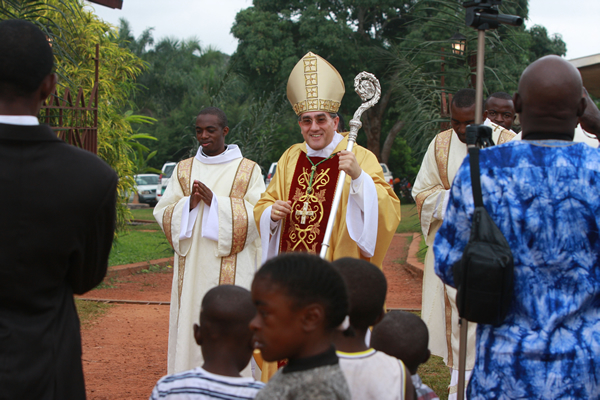 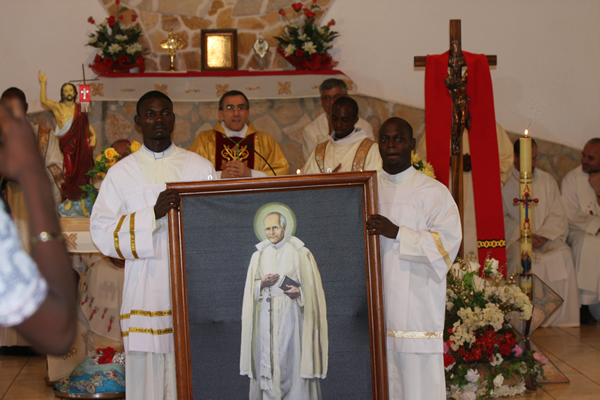 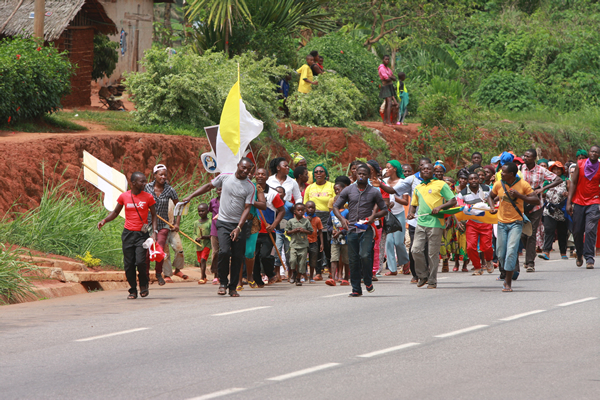